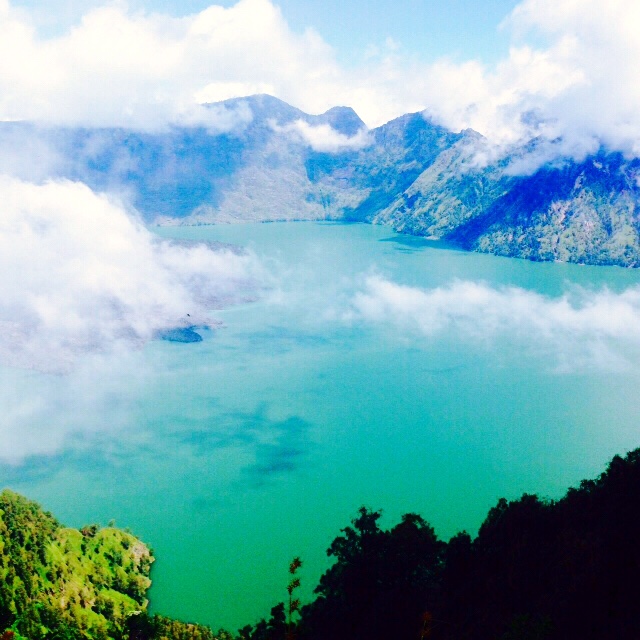 The Lonely Planet says that climbing mount Rinjani is no easy feat. My friends, I can tell you first hand that they speak the truth.

I am writing this post 3 days after descending the mountain, and I can now just about walk up or down a slight incline without wincing in pain.

I was feeling so smug as well, because when we reached the top after 6 strenuous hours of climbing, James said that his legs hurt, and I was all like “Oooh really, do they? Poor you. Mine are feeling fine”

So, what’s the fuss about? Mount Rinjani is a 3700m peak which dominates the north of Lombok island.

You can either do a 2 day, 1 night trek which takes you up to the crater rim at an altitude of 2600m – this is what we did due to limited time. Or you can do a 3 day, 2 night trek where you camp on the crater rim on the first night, then head down to the lake in the crater, before getting up at 2am the next day and hiking up to the summit in time for sunrise, and then heading the whole way down that day too.

Our tour up Rinjani was with Ahmed expeditions, who had been recommended to us by my London housemate Rachel. They were amazing from the moment we arrived on Lombok right up until they put us on a boat over to the Gili Islands.

After our (unnecessarily) epic journey from KL to Lombok we finally arrived on Lombok about 6pm. We were met at the airport by Hadi (our driver) and Irwan who would be our guide for the trek.

Ignorantly, I’d assumed that Lombok was quite small, so when we hopped in the car and I asked Hadi how long it would take to drive to where we were staying that night and he said 3 hours I was slightly horrified.

However we could just sit back and watch the sights pass, and after the sun set we had fun (fear) on windy jungle roads and saw the local kids playing with/in (!!) little fires by the side of the road. 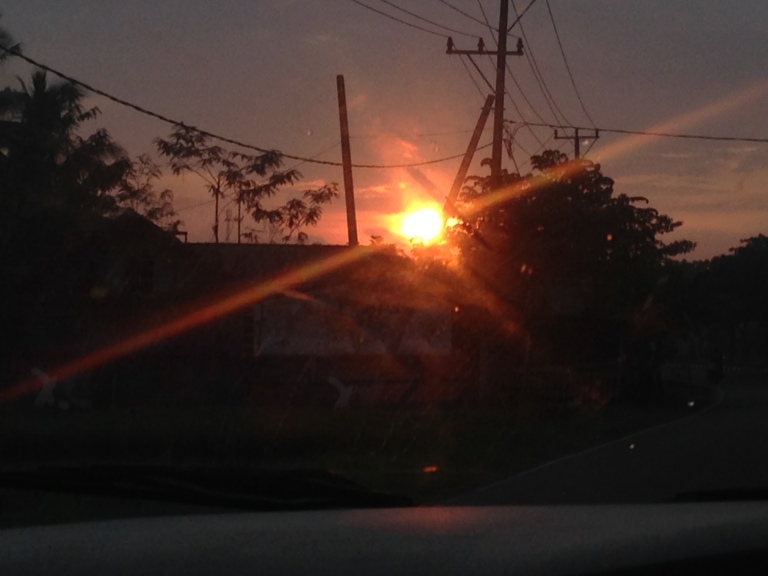 Ahmed Expeditions‘ base is in the village of Senaru at the foot of Rinjani. We were welcomed by Ahmed himself, who set up the company over 15 years ago, and now employs over 100 local people.

I hadn’t realised this but Rinjani is officially closed to trekkers from 1st Jan – 1st April due to the rainy season, so by setting off on 31st March we were one of the first groups to head up.

There were perhaps 8 groups camping on the crater rim the same night as us, and there was a noticeable increase in the number of people going up the next day when we were descending, well over 50.

Irwan told us that in peak season there can be over 1000 people camping at the crater rim! I’m so so glad that we went when it was quieter.

Now, the trek, in short:

But oh of COURSE there was much more to it than that.

We were up at 6am to see the sunrise and wolfed down some quick breakfast fuel before commencing the walk at about 6.30.

The suggested timings were 1 hour of walking between each of the first 3 rest stops: ‘Pos I’, ‘Pos Extra’ and ‘Pos II’. I can only assume that ‘Pos Extra’ was added in to prevent people from getting too disheartened with the distances between each stop!

We were slightly ahead of schedule, arriving at Pos II at 9am. This was apparently where we were due to have lunch! Concluding that we hadn’t yet done enough exercise to deserve lunch we continued on our way, stopping about 1.5 hours later at Pos III.

Pos III was very eventful. First we took some time to relax on a rug and have a steaming cup of tea. We were up at 2000m by now so once we’d stopped walking we quickly got cold (me more than anyone it seemed!) ***angry cold looking photo of Caitlin to follow 😉 ***

Then the guys brought us down some coconut biscuits to have with our tea whilst we waited for lunch. In the meantime, an ominous looking semi-circle of monkeys had emerged from the jungle and were sizing us up.

I was especially nervous as I had watched the Hunger Games 2 on the flight over to Bali, the monkeys in that are less than friendly to say the least!

James started napping on the mat, and I was happily reading my kindle, when suddenly we were caught totally unawares…one of the monkeys had snuck across the 4 metre no-man’s-land between human picnic rug territory and monkey jungle territory and snatched the packet of coconut biscuits.

We both sat bolt upright, causing the monkey to drop the biscuits upside down about half a metre away from us. In our shocked state we reacted too slowly and Mr Monkey then flipped the packet over, grabbed as many as his little monkey hands would hold and scarpered off into the jungle.

He then emerged about 5 minutes later, looking awfully pleased with himself, examined under one of the female monkey’s tails and promptly started having sex with her in front of us.

What a show of masculinity. First stealing biscuits, then sex.

***Monkey sex photos to follow…James has them on his camera…Pervert!***

What an unfortunate start to lunch for us!! The monkeys were loving it though.

After the theft and the PDA things calmed down and we had a leisurely lunch, and set off again about 12.30pm. I found the final section of the ascent the toughest the terrain changed from jungle (with natural steps created from tree roots) to a gravelly-scree. Simultaneously the gradient increased so we were doing 2 steps up, sliding 1 down on our way up to the top.

The final 30 minutes or so was scrambling over rocks and boulders, which I actually found great fun and it helped distract me from the fact we’d been walking for 6 hours.

The weather had turned from a bright sunny morning into a misty afternoon as we walked higher into the clouds. This meant that:

a) Sadly we didn’t have spectacular views across Lombok, although this was perhaps a good thing as we didn’t get distracted and slip off the mountain.

b) We had absolutely no concept of what we were aiming for, or how far we still had to go. 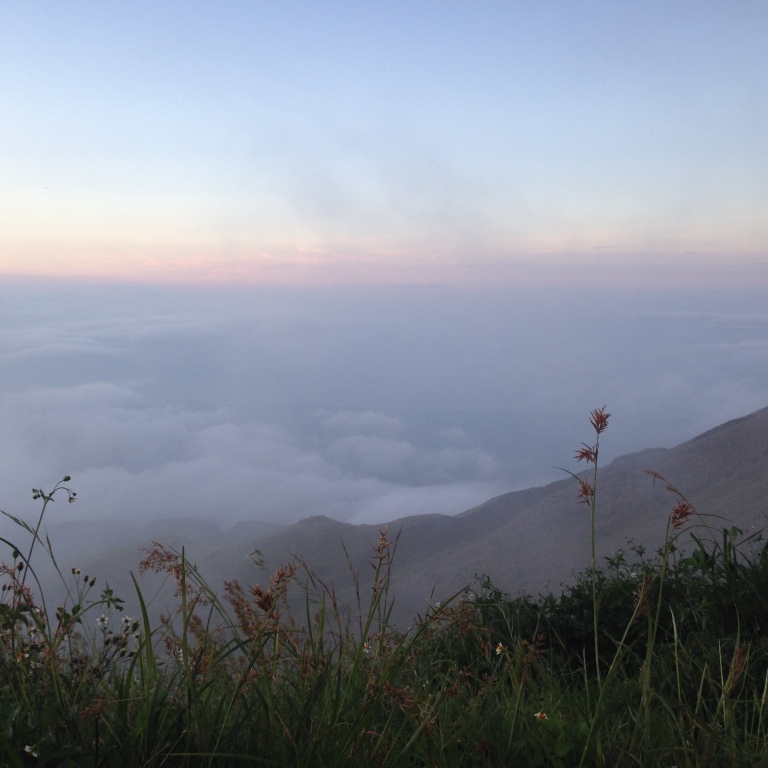 Finally we emerged from the clouds. I thought I spotted a ‘welcome sign’ in the distance.

Admittedly we did have to walk past the sign, but shortly after this we rounded a corner and were greeted with spectacular views down to the lake! We had made it!!

Irwan and the porters then got our tent set up for the night. I made a token offer to help but concluded I’d be more helpful drinking tea 🙂 The porters were absolutely amazing. They carried all the food and extra water and camping equipment up the mountain. Our guys were obviously in great physical condition, but Irwan was saying that a few of the porters were struggling as it was their first ascent in 3 months and they’d just sat at home playing cards during their time off!

Our home for the night was set up on a little hillock about 5m above the main crater rim. It was quite difficult to get back down so I resigned myself to eating, sleeping, and doing AOB up there for the night.

The temperature rapidly dropped at the crater rim, so we resorted to multiple cups of tea to keep us warm.

We took shelter inside the tent and played cards until it was time for dinner and sunset. Reading was a no-no as I had suggested it might be wise that James didn’t bring his 5kg Martin Luther King book up the mountain with him (I obviously brought my kindle!)

We felt slightly disloyal to Rinjani as we were using our Yosemite playing cards. Pitting one natural wonder against another. Though the Rinjani winds got the most of the cards!

Throughout dinner we were somewhat harassed by the dogs who had accompanied us up the mountain. Now they definitely weren’t as bold as the monkeys, but they did better ‘pity me’ looks…. this sort of thing can make you slightly uncomfortable…….:

By the time we’d eaten (and of course given some rice to the cutest dogs) the sun had started to go down:

I reckon we went to bed at about 8pm, so wild! What I had anticipated to be an incredibly peaceful sleep was actually rather disrupted by:

We were up at 6am again (hello new unpleasant holiday trend) to see the sunrise, which is apparently the highlight of the trek. 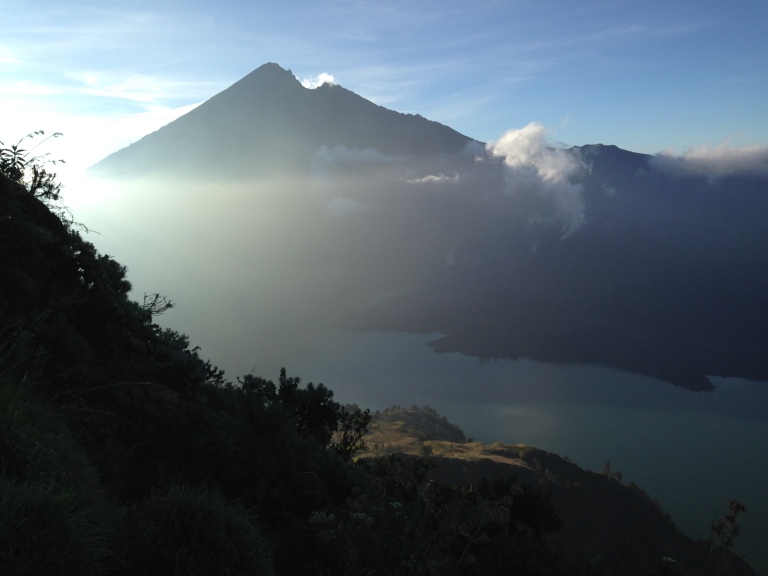 Unfortunately it was too cloudy for a spectacular sunrise, but we did see the summit for the first time, and agreed how glad we were to be heading to a villa on Gili T that evening instead of another night of camping.

Then the descent began.

I made a joke to Iruan about how many times I would inevitably fall over. Then promptly slid down a big pile of scree and ended up with my leg in a crevasse (think 127 hours!) A strong start.

The descent continued in this vein for another 5 hours or so. Me being over zealous and attempting to skip down behind Irwan (who incidentally was probably half my weight!) and then just about righting myself before falling off the mountain 🙂

The journey down was actually much longer than I’d expect. Because it was about 6 hours up, I’d just assumed it would only be about 2 down. Non Non.

It made me think back to when my Dad, sister Claire and I climbed Ol Doynio Lengai, a 2900m volcano in Tanzania. I was apparently the youngest tourist to have climbed this aged 14. And I infuriated the hell out of Dad and Claire by merrily running back down as they braced their quads for the descent.

We were offered a lunch stop at ‘Pos I’ but decided to push on the final hour back to Senaru to be reunited with the rest of our belongings and eat lunch at Ahmed’s.

Once we were suitably fed and watered post descent, Ahmed organised for a taxi to come and take us to the Bangsal harbour where we would catch a boat across to Gili T, our final Indonesian destination.

We said our goodbyes at Ahmed‘s after a wonderful couple of days, and were sad to go, but also very excited for the luxury that lay ahead at Scallywags resort!