Arriving in Granada I was transported back to the start of my trip and the colonial architecture of Cuba.

One man I met there said it was beautiful but quite dirty…he obviously hasn’t been to Havana yet!

I stayed in the very backpacker-ish ‘Hostel Oasis‘. Despite the slightly shabby appearance and cell like rooms it was pretty perfect for the purpose. It had a pool which Annalie and Kalle and I jumped in as soon as we’d checked in. Well technically we didn’t jump, we careful descended the steps, as it was high on the list of hostel rules that there was to be no jumping into the pool.
Especially not from the 2nd floor balcony (!!) as anyone doing this would immediately be escorted from the hostel whilst still wet. 😂

It also offered a free 10 minute international call for guests each day. Whilst I’ve been able to use the variety of available apps (viber, whatsapp, facetime) to contacts friends back at home, my parents are not yet as smartphone savvy (sorry mum and dad!) so I used this to give them a call. It was lovely to speak and my dad reinforced his concerns about me travelling to Honduras.

I’d been fretting about whether or not to go to Honduras. In the end, despite the lure of cheap and beautiful diving courses on the Bay Islands, the deterrent of the murder stats won. That is a very simplified take on my dilemma and obviously I actually did some research, speaking with people who are from there and travellers who had been, and I concluded that it was actually pretty unlikely that something would happen to me, but: a) if it did it would probably be something quite bad, and b) even if nothing happened at all I didn’t want to be on edge if I didn’t need to be.

Anyway back to Granada…I was only planning to stay a couple of nights before heading over to Leon, so wanted to make the most of my time there. I went for my standard ‘familiarisation’ stroll (and ended up having a 2pm G&T in the El Tercer Ojo off the main street) 🙊

I then popped into Tierra Tours which had been recommended to me by a couple on Ometepe. I was hoping to go on a tour of the nearby Masaya volcano the next morning, but they cruelly broke it to me that no-one else had booked on and they couldn’t run a tour for just me. Waaa. They did however offer me the option of joining a sunset tour that afternoon which 6 people were already signed up for.

I decided I should wear ‘practical clothes’ after hearing from Kalle and Annalie about how hard the volcano climb was on Ometepe, and the Tierra tours man strongly suggesting long trousers and good shoes. I was delighted to finally be able to wear my running leggings that I’ve been lugging around with me for Yosemite but without cause to wear in 30 degree heat. My practical outfit was somewhat flawed by the fact I had put all my gym tops, and in fact virtually ALL my tops in to be washed at Oasis. Leaving only the option of a cropped grey tank top I bought in San Juan Del Sur.

With my super bright Asics triathlon shoes, tight black leggings and crop top I looked like some sort of 80s music video wannabe. I obviously felt that this wasn’t quite enough, and completed the look with my zebra-esque lightweight Nike jacket that I bought just before leaving. This is neither waterproof nor breathable, so is the least practical jacket ever. But it looks pretty damn cool (or so I think!)

The tour was brilliant, we drove about an hour out of town to reach the volcano and as we drove into the national park it reminded me of Iceland and the lunar landscape. The contrast amazed me that you could have landscape like this and then within a couple of hours the beaches down at San Juan Del Sur!

In the end the walking was actually minimal. Although I still managed to fall on my bum down some scree and make a fool of myself. We peered into the crater of the Masaya volcano, where the indigenous people used to throw the most beautiful woman in town as a sacrifice. Apparently it was considered an honour so women would fight to be thrown in (I stayed well back from the edge). Sadly the lava was obscured by the clouds of gases coming out but we were told we might see some as it got dark.

We then walked to deep lava caves that go back miles, dusk was falling and we all crouched by the entrance to the cave whilst hundreds of bats whizzed out past our heads. We ventured into the caves, and we’re told not to touch the walls as the cracks could contain snakes or tarantulas!

Our guide told us how during the revolution in the 70s the revolutionaries forced many boys aged 11 up to fight with them to strengthen their forces. Parents who were terrified of their children being made to fight hid them in the caves and some of them lived in total darkness for up to 2 years!

When we emerged night had fallen and we drove up to a higher view point. We were given gas masks for the fumes from the volcano (definitely needed them, everyone was coughing and spluttering still!) and we just about managed to see some faint red glows down in the darkness. My first lava experience – a little underwhelming but beautiful!

That evening I went for dinner at a place called El Camello in town that had been recommended. It had a beautiful courtyard out the back, my supper was disappointing but Annalie had a delicious dish so I think I chose poorly.

The next day I signed up to a boat trip to visit the hundreds of tiny islands “Isletas” near the city. I wouldn’t recommend it….it was like a weird ‘Hollywood homes’ tour but in the middle of Lake Nicaragua. We drove from island to island with the guide saying:
“Mr X lives there…some rich people own that island…here’s an island with some monkey on, the man who owns that island put them here to attract tourists(!!)”

Monkey island was SO weird. Firstly the fact that the monkey had been dumped there to attract tourists. Secondly the fact that the tour operators were actually encouraging the tourists to feed them crap. One man on my trip who Dermot and I had seen in San Juan Del Sur and had thought was odd then enthusiastically thrust a packet of choc-chip cookies towards me:
“Would you like a cookie?”
“No thanks”
“No I don’t mean for you, to feed to the monkeys because you don’t have anything to give them”
“No I don’t want to feed monkeys cookies, I don’t expect it’s very good for them”
“Oh……..” Awkward silence before he runs to the front of the boat and instructs his wife to try and get a photo of the monkey’s hand taking the cookie from his hand……

Post-tour I had the afternoon free so decided to check out ‘Seeing Hands Massage’. A project where local blind people learn massage to help them get some income. Annalie and Kalle had been the day before, it was Kalle’s first ever massage, he’d had a woman and apparently she was brutal, really painful. Annalie suggested I opt for the man if possible.

It was good, a slightly surreal experience…the first half hour or so was standard massage but then you had to turn over, usually they’d cover your chest with a towel and I was conscious that I wasn’t wearing a bra but then of course it registered that it didn’t matter as he couldn’t see me! Still felt quite exposed.

Then I heard people enter the booth next door: “I’m Brian and I’m from England” and the female masseuse. Now I am certain that nothing untoward was happening, however the noises Brian was making you wouldn’t think that.

I put it down to the fact that based on Kalle’s review she was obviously a strong masseuse, but Brian was alternating between a girlish giggle, sexual moans and noises as though he was being attacked. Needless to say it made my experience a bit less peaceful, although quite funny!!

Suitably relaxed I went for a stroll around town, I climbed the church tower just as the sun was setting and it was so beautiful. The sky was changing by the minute and on the one side there was a view of the cathedral and the lake and on the other over to the volcanos.

Sundown, I popped into a sushi place called Kanpai opposite Oasis hostel…yummy yummy yum. I ate back at the hostel as Christoph, Kalle and Annalie had cooked. I had to return something to the sushi place after dinner and as I went out I could hear a marching band coming along the street. It was part of the lead up to the festival of the Immaculate Conception Dec 7th and 8th. I got caught up in the parade and walked with it to the central park where I grabbed some candyfloss (such a child) from a street vendor and found a spot on a bench to watch everyone filter into the cathedral – I was tempted to pop in but didn’t want to get locked in for a 2 day prayer! 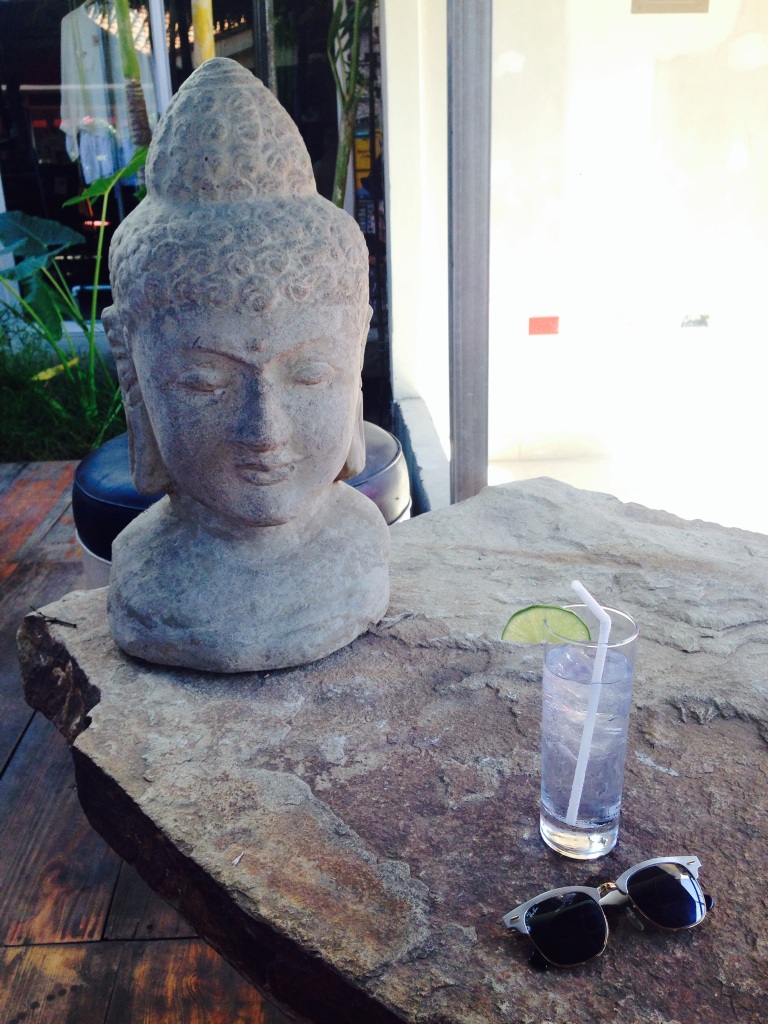 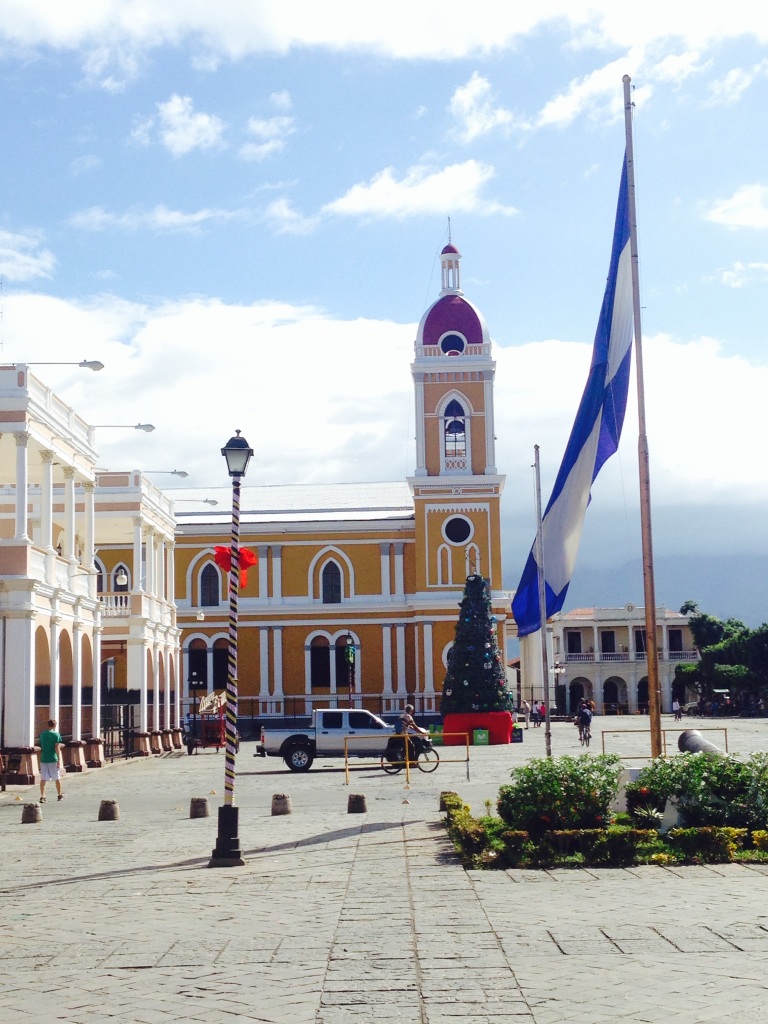 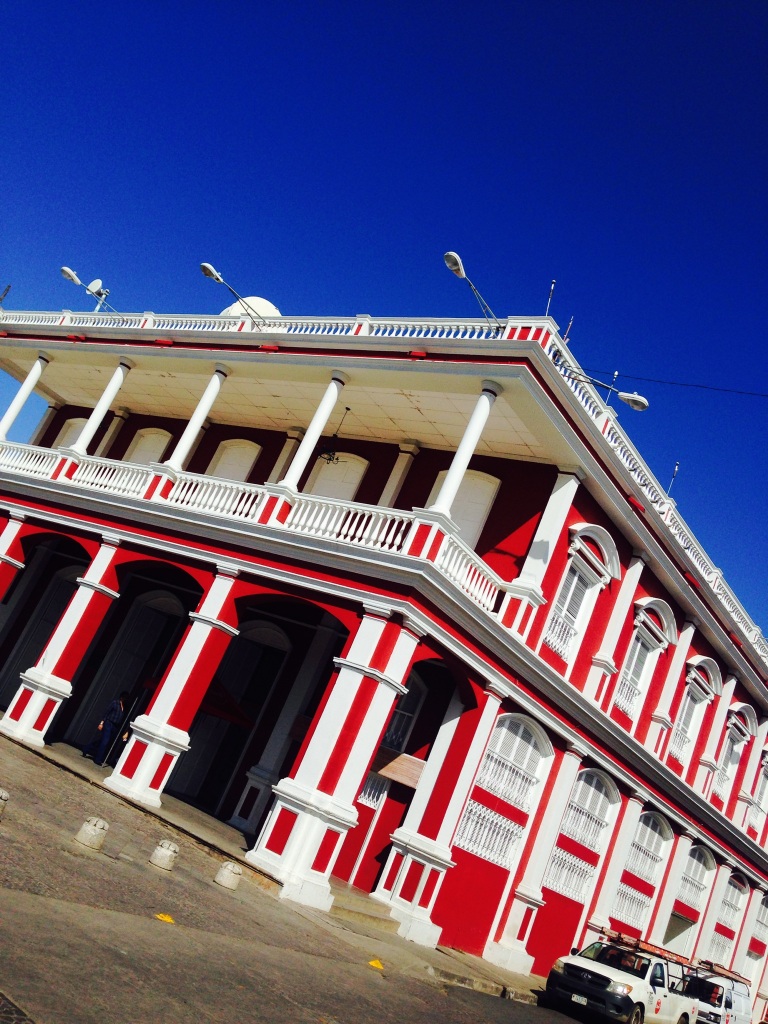 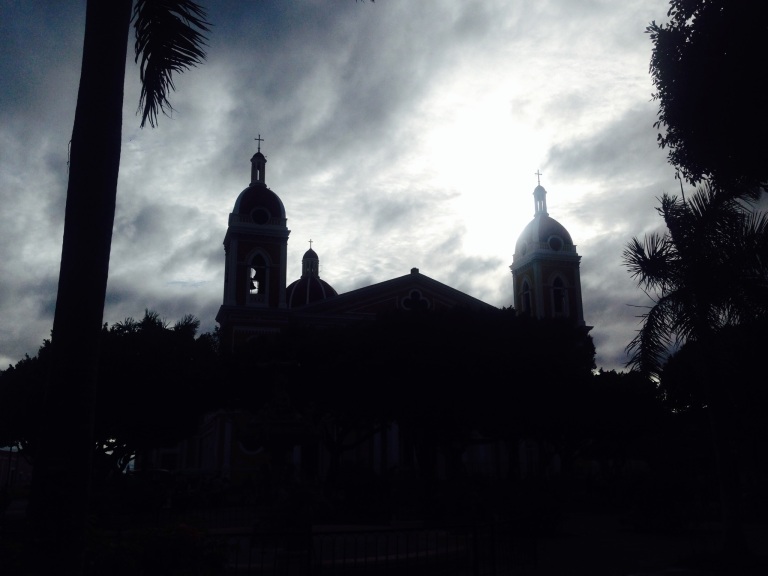 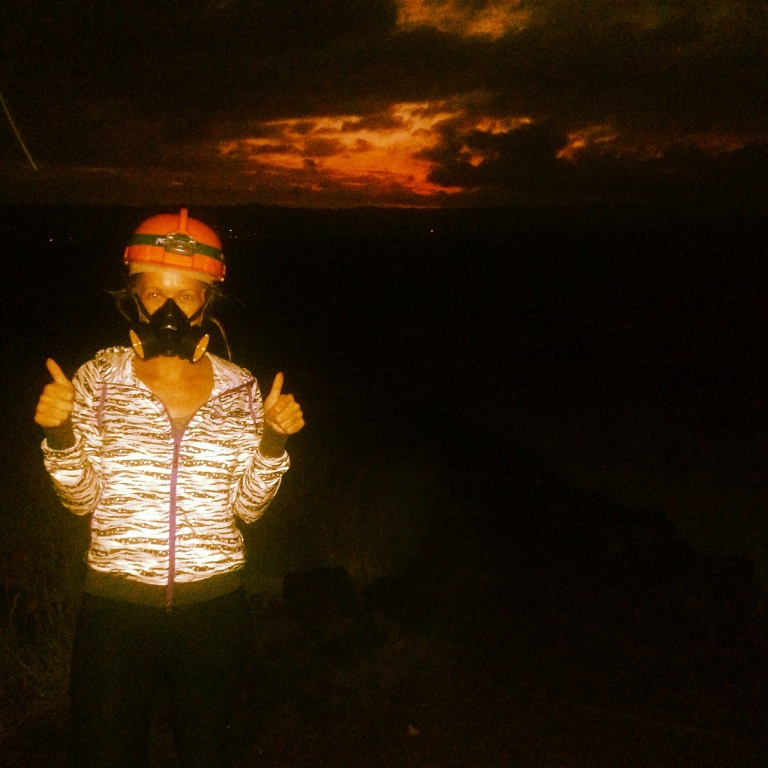 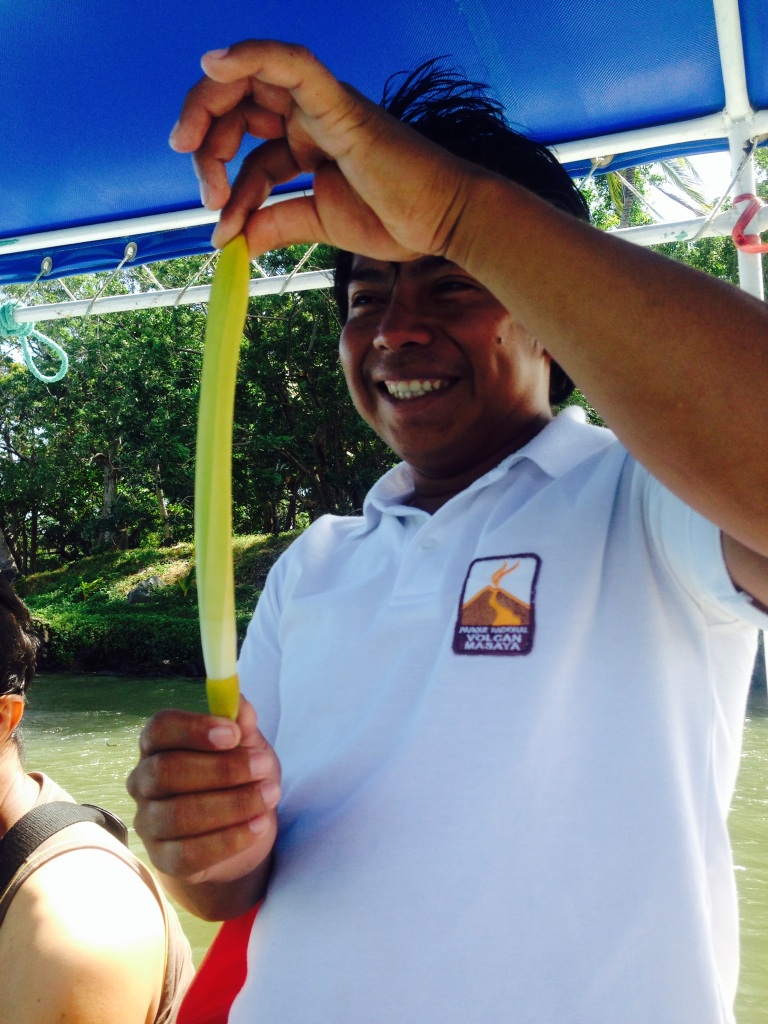 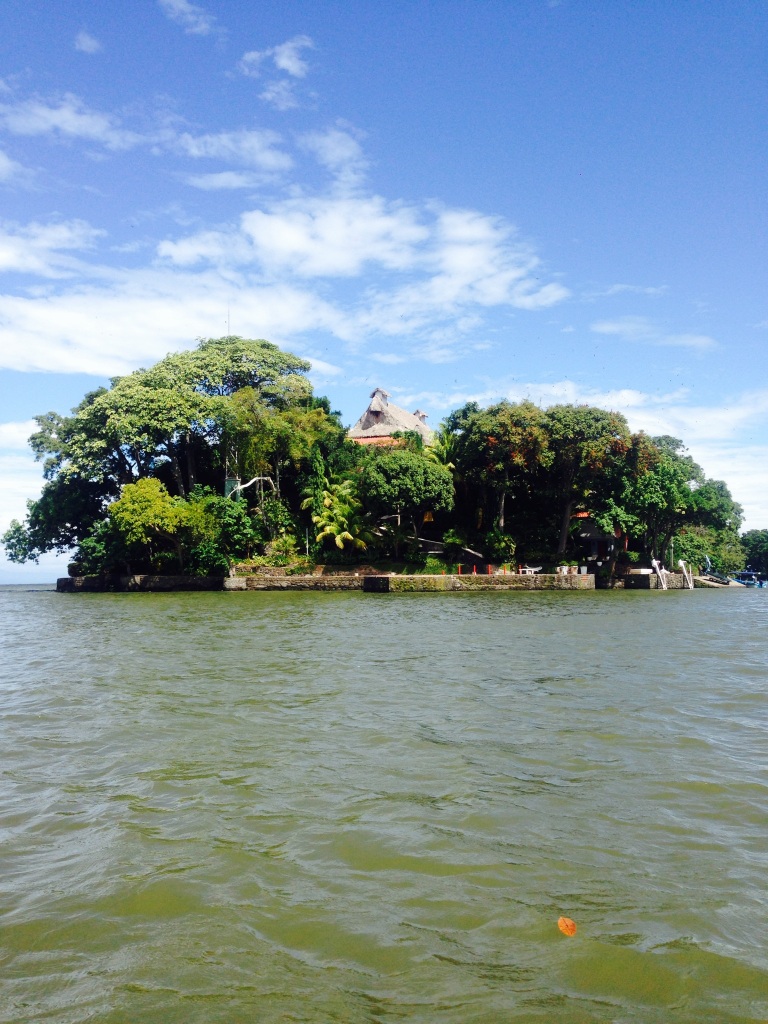