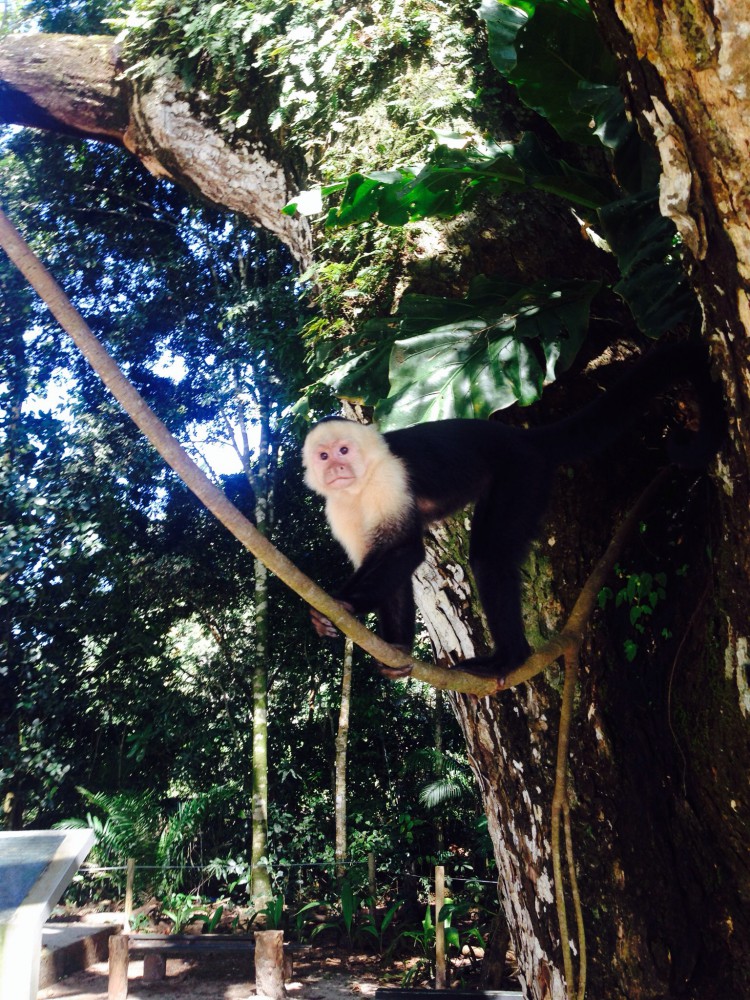 As you can probably guess by the fact that the blogs have continued, Dermot and I survived the flight from Bocas to San Jose.

In fact it turned out to be pretty fun!!

There were six of us on board. Dermot and I were a little disappointed by this as we were hoping we could pretend that we had a private jet. The pilot got on at the back and walked through the cabin saying good morning to each of us individually. Apparently there were still four emergency exits on the plane….I think these must have been the windows! It was a surprisingly smooth journey with great views of the Bocas archipelago as we took off and then the rainforest covered mountains as we flew over Costa Rica.

One of the perks of the tiny flight was we didn’t end up in a huge queue at passport control and sped through. We were conscious that we had just over an hour to get into the centre of San Jose, work out which of the four bus terminals we needed and sort our tickets down to Manuel Antonio. The bus was far less comfortable that the ones in Cuba: crowded, cramped and no aircon! The end of the three hours couldn’t come quick enough!

We were staying in Quepos, which is 7km up the coast from the town of Manuel Antonio and the national park but has a bit more going on. We stayed in a place called Casa Pargo – Monkey Villas which we found on AirBnB. It was up on a hill and had stunning views down over the Quepos Marina, great sunset spot too! It was self-catering so the first night we decided to cook ourselves a fajita feast 🙂 managed to source some delicious fresh avocados and limes and a super hot chili to make guacamole!

The next morning we got up early and headed to the national park. It’s the smallest national park in Costa Rica but has the most visitors each year, I think because of the density and variety of wildlife! When we arrived we decided were planning to go in without a guide but in the end managed to arrange one for $10pp (instead of the $20 initial price) and were SO glad we did. We would have seen absolutely zero animals otherwise. Our guide, Wilburt, had worked in the park for six years and had an amazing eye for spotting sloths 50m up in the trees, tiny lizards and bats and the ‘stick bird’ – camouflaged to look like a tree it is apparently one of the most rare birds to spot in the park! We saw both the two-toed and three-toed sloth, the difference between them (other than the toes!) is that the three-toed sloth has a permanent smiling expression!

Our tour lasted a couple of hours and then we headed to the beach. There are two easy to access beaches in the park: Playa Manuel Antonio and Playa Espadilla Sur, and at first we opted for the nearest and therefore most crowded. I was wearing my sports stuff so needed to change into my bikini. Being lazy and not wanting to walk the 2 minutes uphill to the changing rooms I attempted to do a ‘subtle’ change behind some rocks. There were a few issues with this: a) I quickly realised that whilst I was hidden to people on the beach, everyone in the sea could see me; b) the rocks I had picked to balance on were both very spiky and very hot; c) when I lost my balance and went to grab onto a higher rock I saw a little too late that it was the sunbathing spot of choice of a giant lizard!!! All in all a rather traumatic experience. In future I will learn not to be lazy and to go to the proper changing rooms (I probably won’t..)

Halfway through the day we switched to the other beach which had more shade and was quieter (real reason being that the people there hadn’t seen me with my pants down!) We’d read in the guidebook that thefts are ‘depressingly common’ on the beaches in Manuel Antonio. What the guidebook hadn’t said was that the majority of thefts appear to be carried out by raccoons on the snacks of unsuspecting tourists! 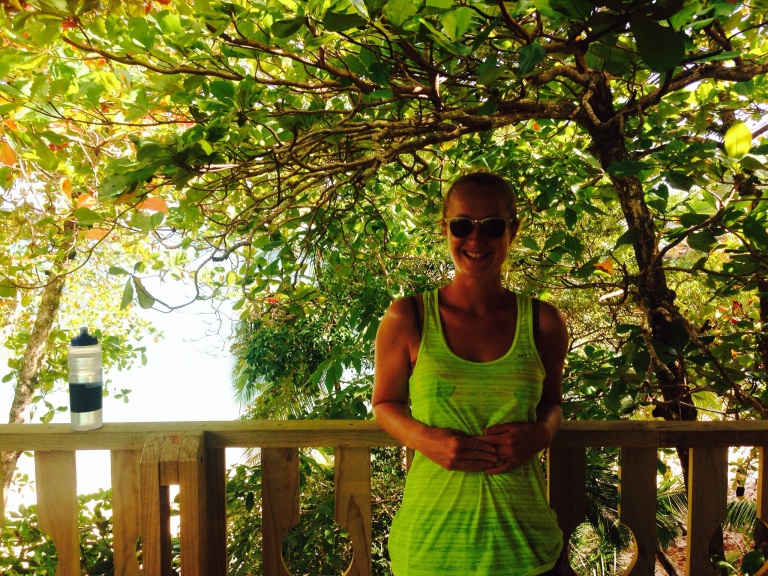 Sadly we weren’t amongst the robbed. We had anticipated that like everywhere else in the country there would be plenty of enterprising people trying to sell us agua/snacks/coconuts at any opportunity. We hadn’t factored in that because it was a national park there were no shops/restaurants (a pleasant change) but it did mean that we were driven out of the park by hunger at about 2pm. So a tip if you’re planning to go there…go prepared, and then keep a close guard for the raccoons. 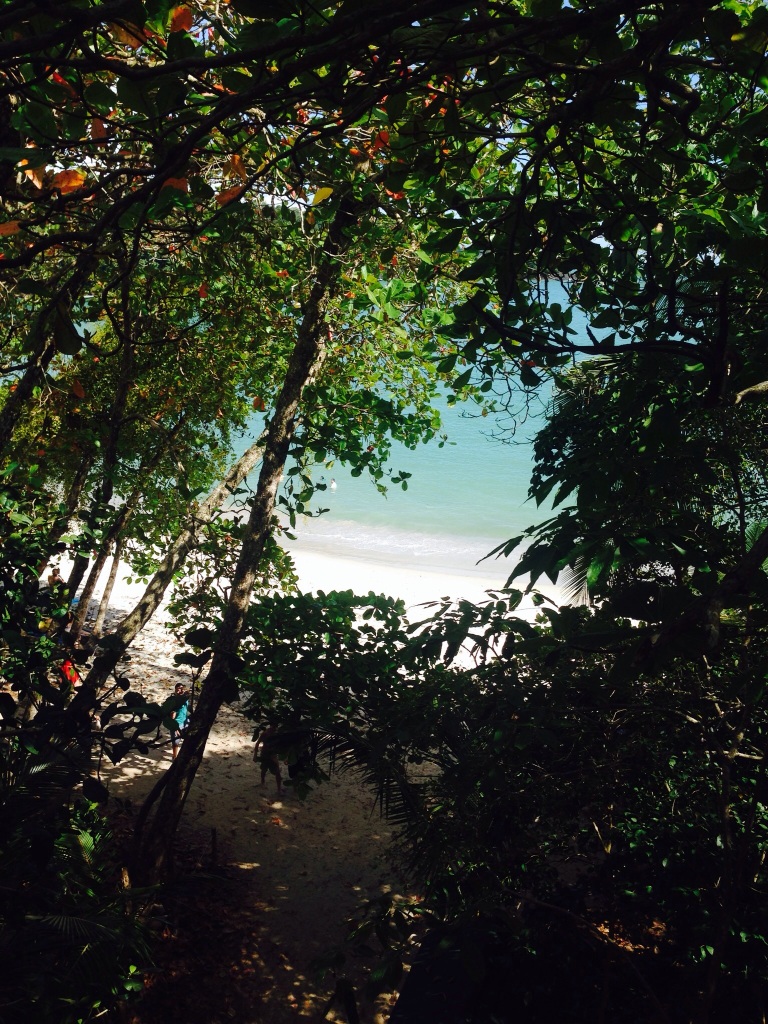 It made me laugh as it reminded me of the last time I came to Costa Rica and my first solo trip abroad. I was 16 and went for 3 weeks on a ‘surfing and turtle conservation’ volunteer trip with the organisation ‘i-to-i‘. We were based in a camp on Playa Buena Vista, near Samara on the Nicoya Peninsular. The camp was super basic, no electricity, no shower (you had to go into the woods and tip a bucket from a well over your head whilst the crabs came out to watch!) and at night the raccoons would come to raid the kitchen. We’d try and scare them away by banging bin lids and shouting but if anything this just encouraged them and made them the fearless cookie-hunters they are today at Manuel Antonio.

That evening we went down to the marina in Quepos for drinks and dinner. The setting was so lovely, if we were in the Mediterranean the restaurant (‘Runaway Grill’) we were in would be the hot spot in town…instead it was totally deserted! It had stunning views out across the marina to the ocean and sunset beyond. The marina’s undergoing loads of development though, so maybe in a few years it’ll be the place to be?! Saying that, the food at runaway was overpriced and a little disappointing. Especially compared to the DIVINE burrito I’ve had the evening I’m writing this in Monteverde.

Our final day in Manuel Antonio and it was time for me to revisit the surfing skills learnt on my first trip here 8 years(!!) ago. Let’s just say it didn’t come back like riding a bike 🙂 Lessons were pretty expensive on the main Manuel Antonio beach (Playa Espadilla), so we hired a board for an hour and took turns making fools of ourselves in the shallows. I had just about got the hang of wobbling into shore standing when time was up. I also have a beautiful bruise on my thigh from one of my earlier tumbles where my leg took the full impact of the board via the fin, ouch!!

It was a cloudy day on the beach, even with some light rain. I said to Dermot that it was perfect sunbathing weather, as it felt cool enough to lie out in without hunting down the shade but you could tell the sun was also really hot behind the light clouds. Dermot took it upon himself to rectify the rather unusual tan/burn lines that he’d managed to get on the boat trip and gave himself a good little session in the sun. The results of this weren’t evident until we got back to Monkey Villas that afternoon. All I’ll say is that he’s currently lying with a damp towel on his chest, 24 hours later!

For those of you who came on the post-TI exams trip to Brighton you may recall the very impressive headphone tan/burn lines that Dermot managed within 10 minutes of falling asleep on the lawn in the sunshine. It’s the Irish complexion. (Says me, the naturally Brazilian-bronzed goddess 😂)

Glowing red, we waved goodbye to Quepos and Manuel Antonio, but not before a stop off in L’Angolo’s Italian sandwich shop. Zil (our AirBnB host from Panama City) had been traveling in Costa Rica recently and said that it was “the best sandwich she’d ever had”…added to by Davide with “but the worst service!” (I think he’d tried some Italian bonding with Angolo and it hadn’t gone down well!)
We popped in with post surfing hunger and weren’t disappointed. I wouldn’t say that it (smoked ham with cheese and avocado) was the best sandwich I’d ever had, nor the worst service, but it had delicious charcuterie ready to slice on request, huge hunks of various cheeses and good quality bread.

The trip from Quepos to Monteverde involved 2 buses, changing at Puntarenas. To Dermot’s dismay there were no internal death-planes we could get to make this faster so we packed some snacks (we’re learning) and prepared for a day on the bus.