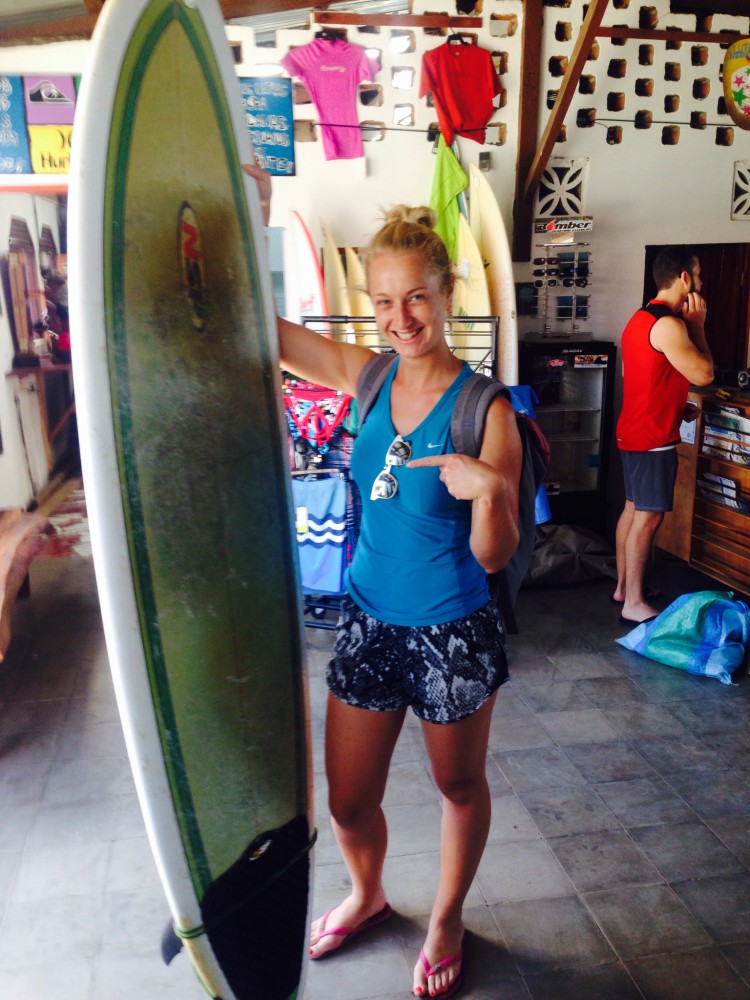 Let us take hold a moment of silence, in memory of the go-pro…

The biggest casualty of the trip so far occurred in San Juan Del Sur, I can hardly bear to say it but the go-pro has been lost to the sea!!

We were on Playa Hermosa with the ‘Good Times Surf School‘. Our teacher, Esayo, was fantastic, he knew exactly which waves we should try to tackle, and gave us a helpful push without which our weak paddling would be insufficient to catch the wave, and shouted “UP” to make sure we weren’t just wimps kneeling on the board the whole way in (though that happened a couple of times).

Typically, it was on the last wave that we were attempting before going in for lunch, crashed out, emerged, and the go-pro was nowhere to be seen! We spent about an hour searching in the shallows, and the deep, but to no avail. Only managing to step on various creepy things on the bottom which it later transpired may have been sting rays.

I asked Esayo whether there was any chance that it would wash up and he said that our best best was to come back early the next morning when it had just been high tide and all the debris would be washed up on the beach.

We managed to find a taxi to take us to the beach at 7am and wait whilst we searched. When we first got to the beach I was feeling positive, as there was tonnes of stuff up at the tide line. We knew roughly where ‘the incident’ had occurred due to three huge pieces of driftwood anchored in the sand. Sadly, hope waned, and then died out totally as we spent about an hour combing the beach, finding EVERYTHING else in the world: flipflops, life jackets (worrying!), glass bottles (no messages), walking boots, full coke bottles, buckets, everything!!! But alas no go-pro 😦

At least by going back I felt like we’d done all we could to try and find it. I also left my details with the surf shop, and the beach bar at Playa Hermosa, but I’m not holding out much hope.

The blindly optimistic part of me hopes that I get some good karma and someone finds the go-pro, then a) understands what it is, and b) uploads the videos and posts a highly emotive message on Facebook which then goes viral trying to find these lovely people who had such fun cycling through rivers and zipwiring and surfing.

In reality a) they’ll probably sell it, and b) if they upload the videos will just get lots of close ups of Dermot’s face saying “yep, NOW it’s on”.

I was so sad to lose it and especially the videos of the trip so far. Made even worse by the fact it was a present and I’d owned it less than a month. Now there will be no video montage for you all come December – Dermot and I did consider trying to recreate our activities with stick men. Watch this space.

The next morning when we bumped into another guy Pedro from the surf shop on the beach he said “You should really have got one of the floaty things to attach”…..

Yep, yep thank you very much, I realise that now, And when the woman in dixons at the airport was helping me decide on accessories I obviously preferred the selfie stick over the floaty thing, And in the end only opted for the nerd head-strap because realistically who needs a floaty thing? If I take it into water I’ll be super careful. Right? AND TELLING ME THAT WILL NOT HELP FIND IT!!!

The only possible way to console myself was by eating my way out of sorrow. For lunch I luxuriously ordered a grilled lobster with garlic sauce from the Hermosa beach bar, accompanied by a frozen passion fruit daiquiri.

That evening the trend continued, with Dermot and I heading to ‘Nacho Libre‘, a mouthwatering burger joint on the main street in San Juan Del Sur. I had a chicken satay with bacon burger and garlic salt chips, Der had a chicken burger with pesto and sundried tomatoes. Yum yum yum. I washed mine down with a chili mango margarita (they used paprika instead of chili so it didn’t have the same kick as at the wine-bar in bocas!)

To be honest, it may not have even been comfort eating, it may just have been standard practice. As the night before, when the go-pro was sleeping safely in the locker at the hostel, we’d indulged in wonderful tapas at a little place called El Bocadito just back from the main street. We’d also had a fantastic lunch at a hippy-ish book shop called El Gato Negro which did fresh passion fruit iced juices, smoothies, and tonnes of tasty bagels stuffed full of avocado, bacon, eggs, all sorts!!

We’d read a few warnings in travel guides about safety in San Juan Del Sur and that there had been some tourist muggings at night. This was reinforced by the sign in our hostel “Do not go to the beach at night you will get ROB”. This caused some amusement and when we walked along the seafront in the evenings we called out for Rob (all the while staying a safe and precautionary distance from the beach, of course!)

Perhaps Rob just knew that I’d had a rough day already with the go-pro and took pity on me.

The conclusion from our brief stay in San Juan Del Sur…great for surfing, felt very safe, great for food, terrible for electronic safety 😔

Following our early morning trip to the beach, we switched into another taxi to take us to the town of St Jorge on the edge of Lake Nicaragua, where we could catch the ferry across to Mayagulpa on Isle De Ometepe – the twin volcano island in the middle of the lake where we’d be spending the next couple of nights! 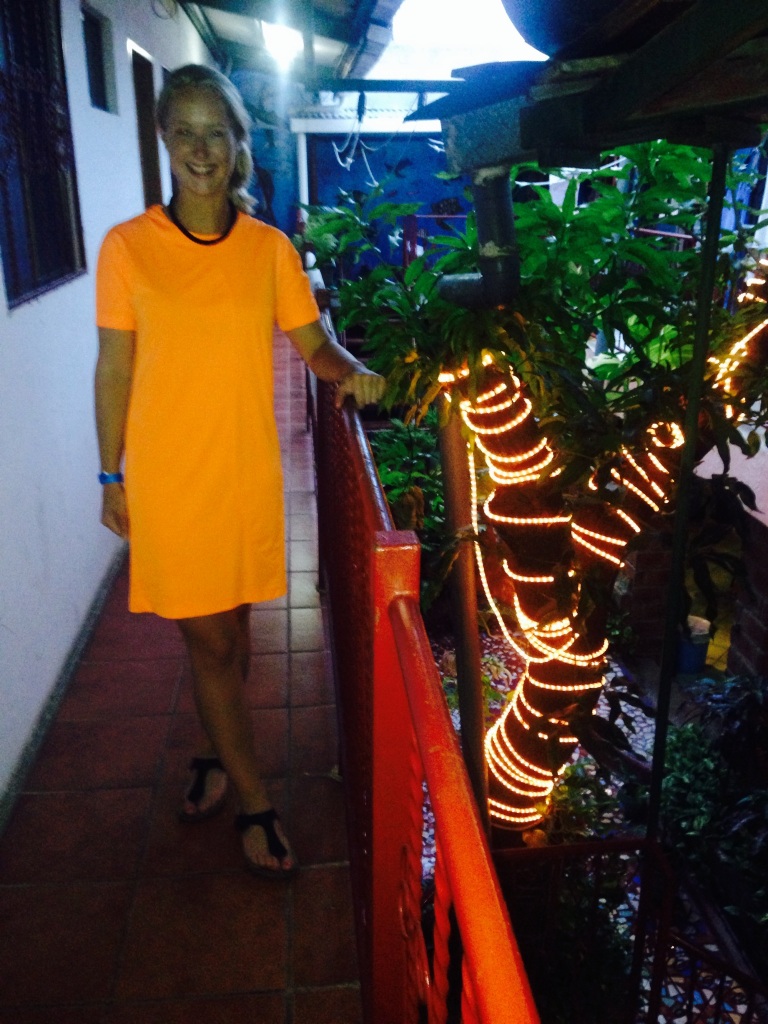 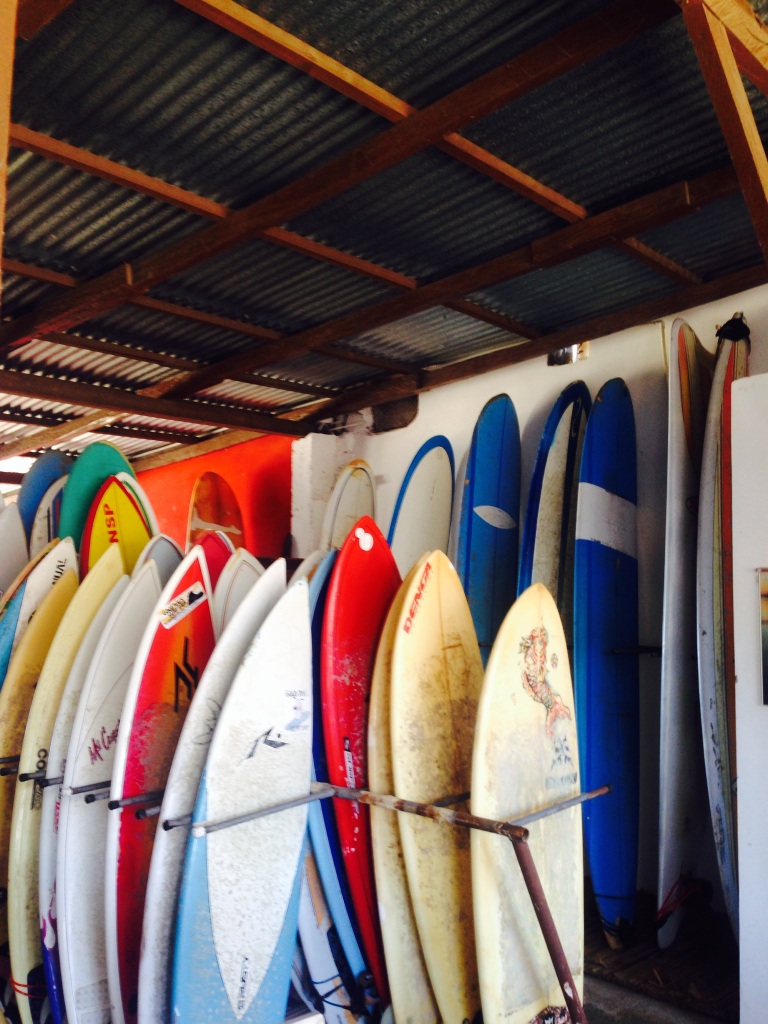 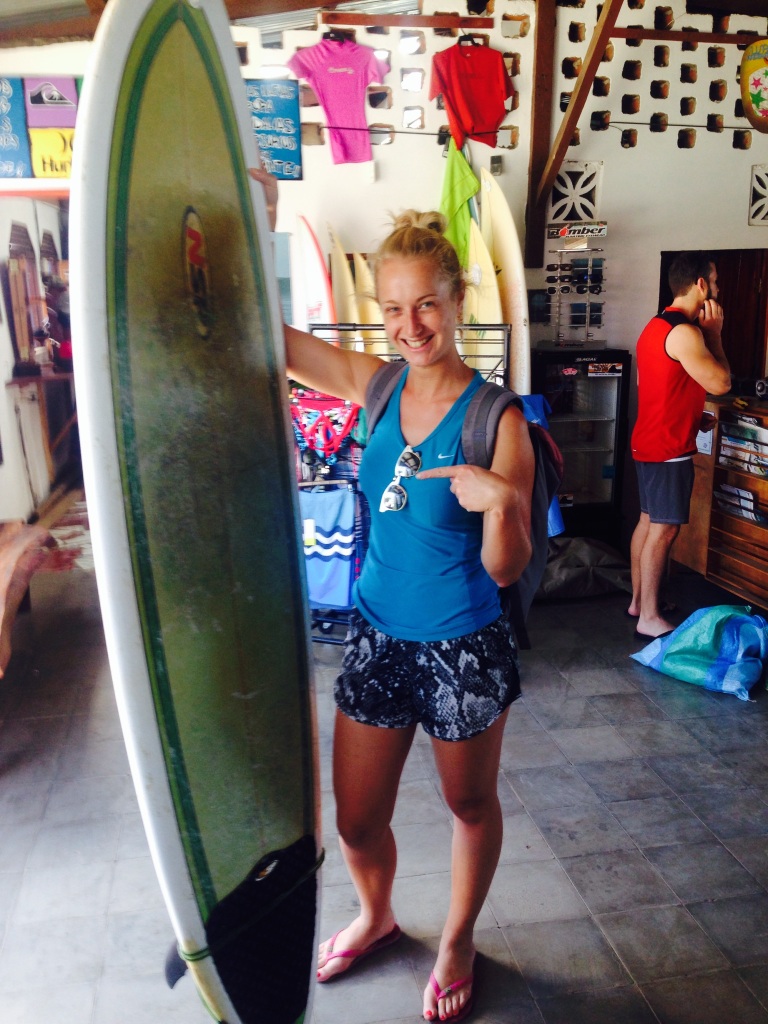 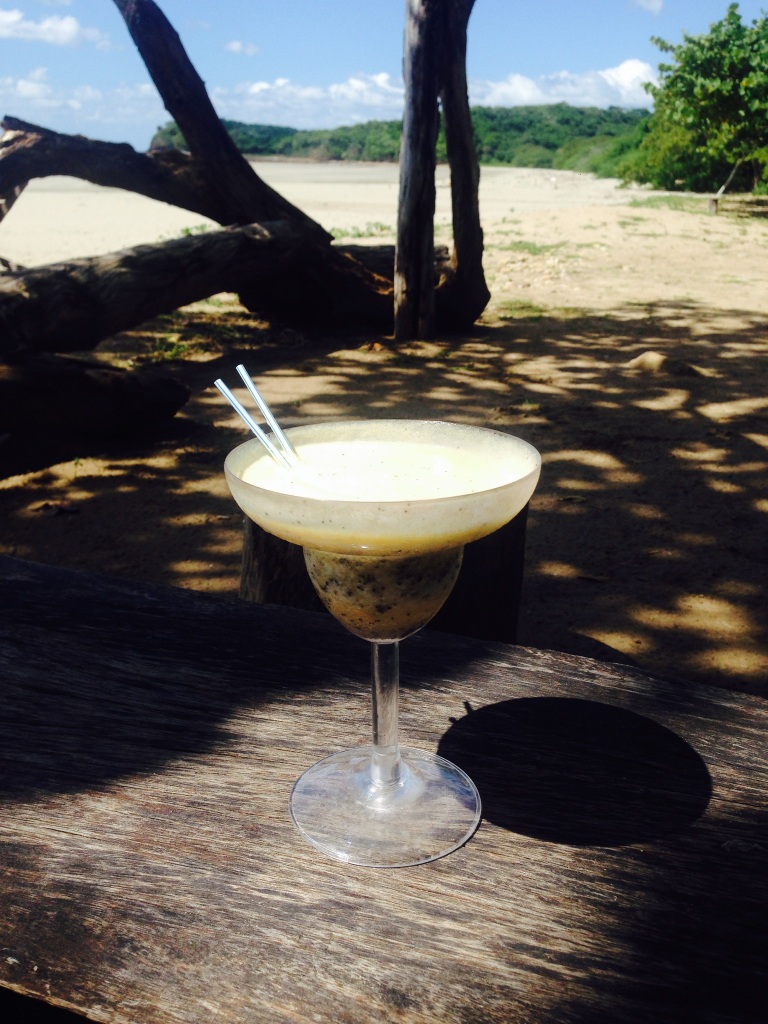 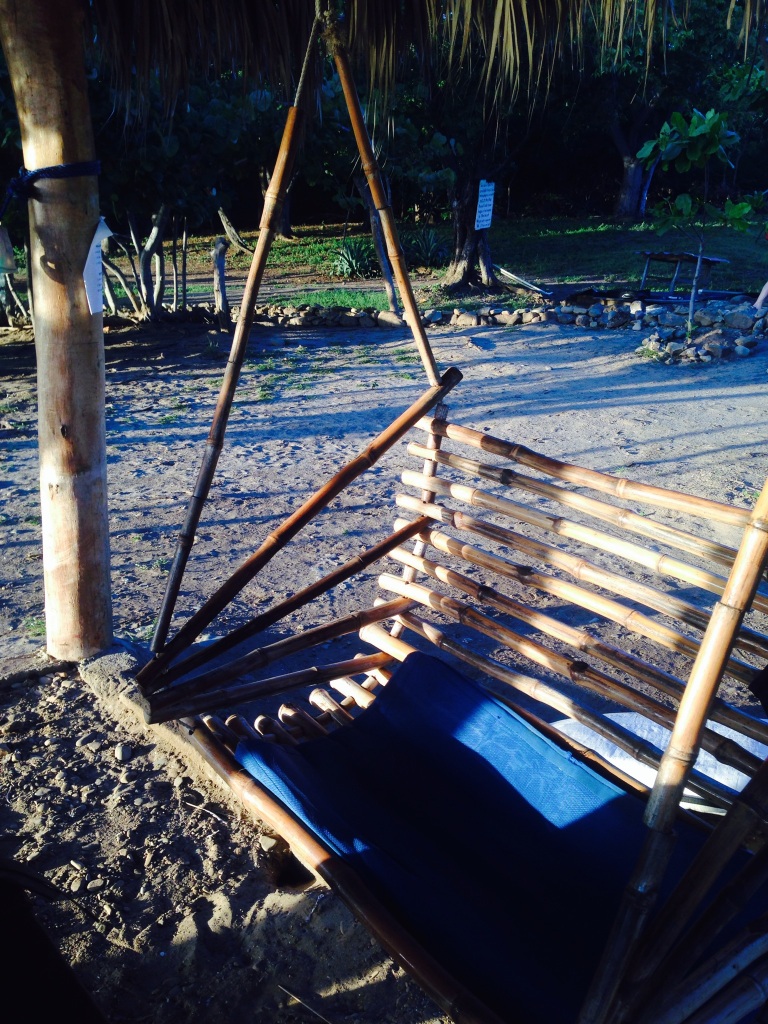 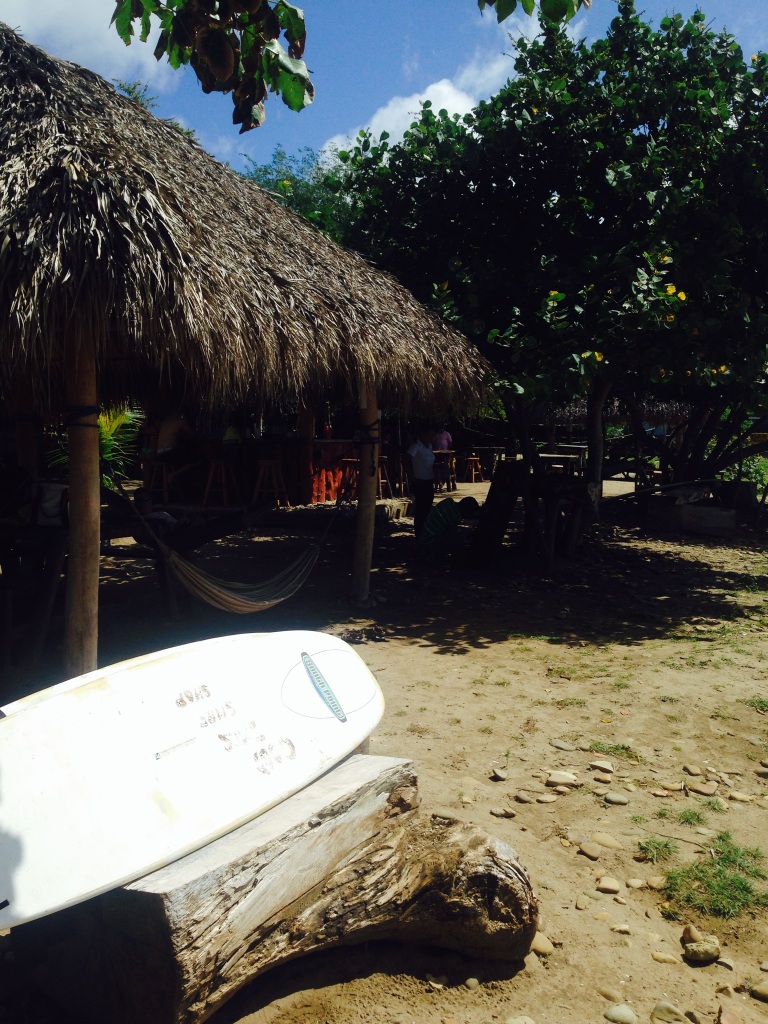 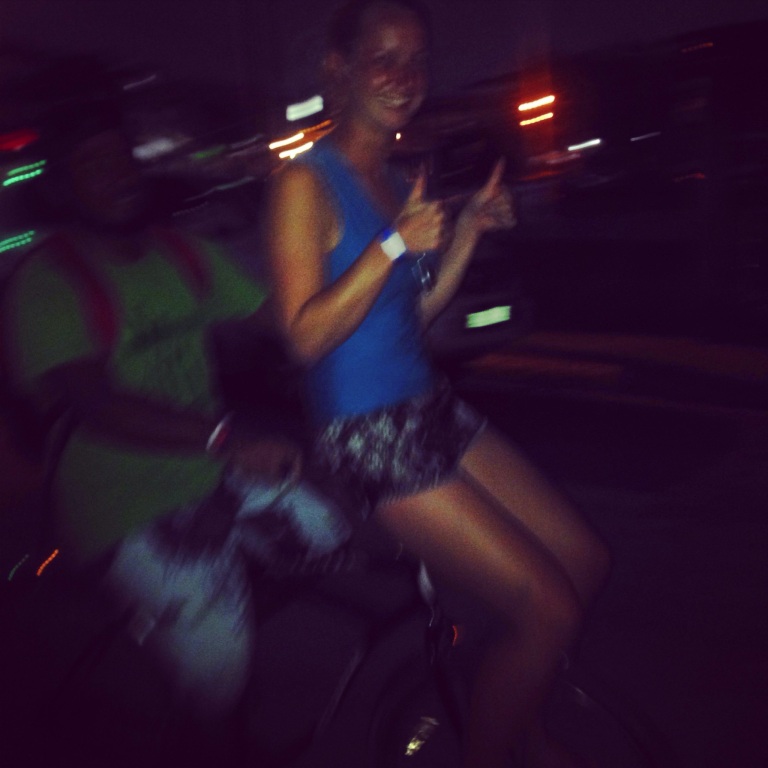 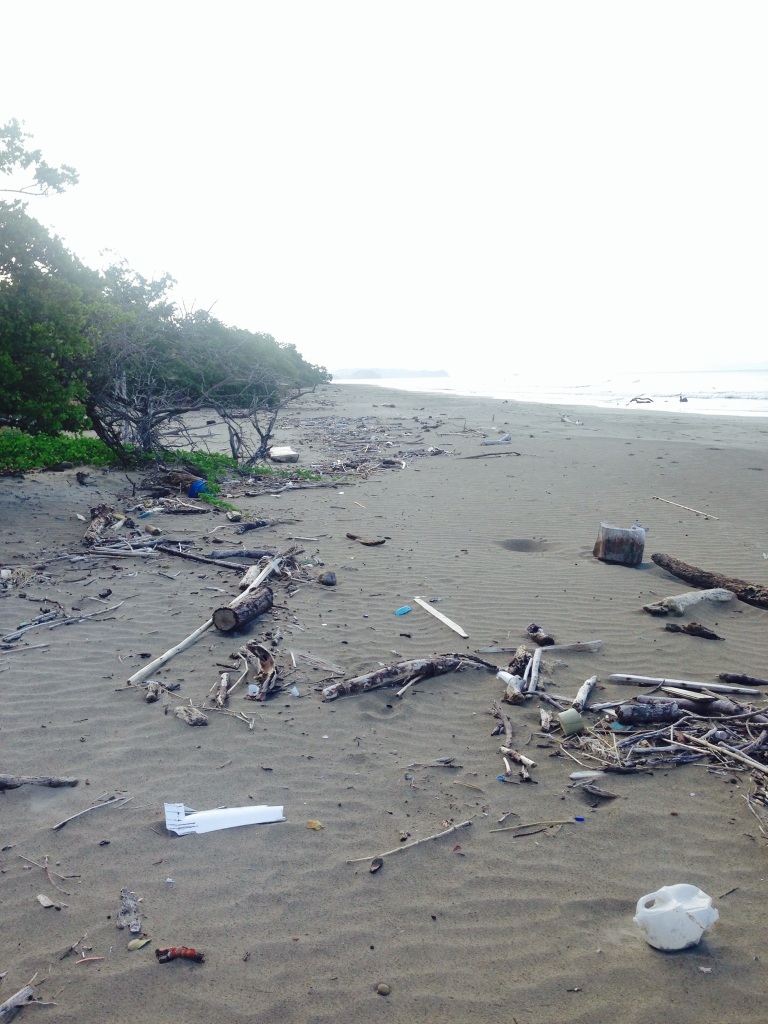 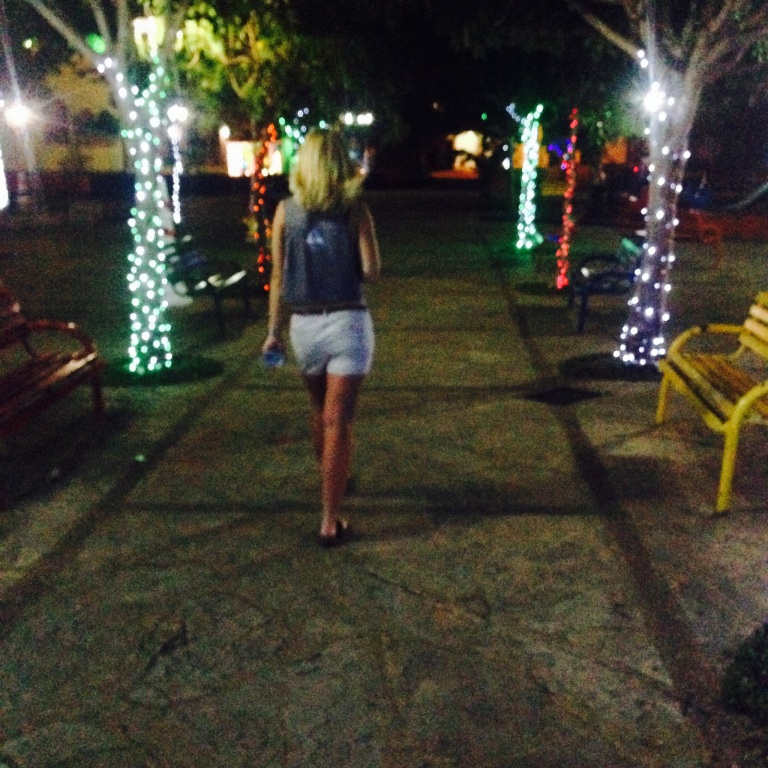