I heard ‘Jervis Bay’ mentioned numerous times in my first month in Australia, especially when I asked people where they would recommend I visit outside of Sydney. It certainly lived up to its reputation on my ‘mini-break’ there last weekend.

Well, ‘mini-break’ is perhaps the wrong description since the main purpose of the visit was to participate in the Husky triathlon, in one of six teams from Coogee tri club. Though outside of the racing we definitely fitted in a fair amount of food, drink and fun.

Matt, Mike and I (aka dream team) drove the 3 hours down the coast from Sydney on Saturday afternoon and had some quality team-bonding time in the car. This mainly consisted of asking each other riddles and doing Disney singalong which I believe really helped our tactics and performance the next day.

The weather on the drive was absolutely grim and I was really not looking forward to being on my bike for 83km the next day if it stayed that way. Don’t believe all you hear about constant Aussie sunshine!

We arrived down in Jervis just in time to check into the ‘Bay Blu’ apartment that a group from the club had rented in Huskisson and get down to register for the tri.

Just to explain, “Jervis Bay” is used to refer to the wider area and the c.100sqkm bay, and Huskisson is the town we were staying in which is pretty much slap bang in the middle of the bay.

I was originally planning to just stay the one night down in Husky but three of the tri club (Russell, his wife Lisa, and Steve) were all staying until Monday afternoon and offered me a lift back to Sydney with them. I was really glad that I decided to stay as by the end of Sunday I felt like I hadn’t properly seen the area, despite cycling in a giant loop around it 3 times that morning…head down dedication…obviously.

On the Monday we had a delicious brunch at Supply in Husky and then drove to the beautiful Hyams beach, which is apparently known for its ‘squeaky sand’ because the grains are so fine. When we first arrived it was a little overcast, and Lisa was disappointed as she wanted me to see it at its finest with turquoise water and white sand. As the day progressed and we’d body-surfed a few waves the sun burnt through the cloud and showcased the beach in all its glory!

I have to admit that I was a little hesitant about getting in the sea. The previous day, straight after the race, some of the guys from the club had gone down to Hyams for a swim, and oblivious to Russell and Cormac but to the horror of the onlookers on the beach a little sharky swam right between the two of them!! (they’ll tell you that it was a 5m monster)

I definitely had my best ‘shark eyes’ on after that (no, not like that!) and with the exception of a minor seaweed scare all was well in the water. We followed up the swim with a hearty lunch at the beach cafe. When brunching at Supply we had said “this will keep us going all day”, but I’d like to think I was still in calorie deficit from the cycle. Surely.

The weather stayed stunning for the rest of Monday afternoon, meaning that I got to see a lot more on the drive back up to Sydney. I added ‘Kangaroo Valley’ to my list of places to visit and we popped in for a mid-afternoon wine tasting at Silos Estate vineyard where we tried a fizzy red. A FIZZY RED! This was a totally unknown concept to me until now. I mean it was quite nice, but it just felt wrong. Since Russell was driving he was deprived of wine, and considered buying a bag of ‘Alpaca jerky’ to console himself, however once Lisa spotted the little alpaca faces in the fields outside (and the E-numbers in the jerky) it was popped back on the shelf.

After about 15 minutes back on the road we saw a brown sign, you know like the ones for national trust buildings in the UK? Or historical monuments? Well this sign indicated to us that “The Treat Factory” was a mere 1km away. Who do you know that could resist such a sign? Off we turned, as we drove through an industrial estate I briefly feared that it wouldn’t live up to my visions of Willa Wonka’s factory down under, but once we arrived it was a treasure trove of goodies, and with 10 minutes to go before closing we rushed around like children sampling chocco-jelly-worms galore. By this point the calorie deficit was questionable.

A quick aside: a year or two ago I met an interesting young man at a Deloitte event. He ran a film production company with his two brothers and he told me about ‘brown-signing’…where one sets aside a day, preferably a Sunday, and heads out in the car, stocked up with supplies, and then you just drive until you see a brown sign and follow it to the destination. Then once you’ve seen that place you do it again, and again, until either you are tired of arboretums and oil paintings or the picnic basket is exhausted. I remember thinking at the time how it’s the sort of bizarre outing I’d really enjoy but I’ve yet to do it. If any of you give it a go please let me know how you get on.

Now to the main event of the weekend….THE TRIATHLON! To summarise: an amazing weekend with such fun and welcoming people, sprint races on the Saturday and team and long course races on the Sunday.

In my team I was sandwiched between the two Ms: with Matt swimming the 1.9km, me cycling the 83km and Mike running the 20km to finish us off. There were 6 teams from Coogee, 2 male, 2 female and 2 mixed. All the triathlons I’ve done to date have been individual, and I think I almost felt more nervous doing a team race as I wasn’t just competing for myself, there were others relying on me! However the team bonding in the car, and the fact that the two Ms were the last men standing at the pub on the Saturday night before the race reassured me that it might not be too serious an affair 🙂

Racing as part of a team and part of a club made the whole thing so much more exciting. The tris I’ve done back in England have always just been me getting myself around the course, getting a buzz out of my own race obviously and then maybe a little excitement peak from seeing some friends on the sidelines, or seeing my friend Rachel as we pass each other on the bike in the London tri.

Husky was a totally different affair. In our ‘race briefing’ the 2 Ms had drilled into me “Just catch Coxy” (this being Michael Cox, the cyclist for the other mixed team). The swimmers set off at 9am and it was then an anxious wait in the transition area, helmet on, ready to spring into action. As they started to appear up the steps out of the ocean my eyes scanned the faces, worried I would miss Matt. I saw Russell and Julian (the swimmers for the male teams) and Kelly and Alice (swimmers for the female) sprint out and then suddenly there he was. I fumbled with the timing chip to get it off his ankle and onto mine and then I was off!

The cycle was 3 laps of a pleasant loop out of Husky, not along the coast but looping inland. When I’d asked people about the bike course the word used to describe it was “undulating”. The first lap I was feeling good and didn’t really notice the undulations too much, but on the second and third I felt the tiredness in my legs. I set myself mini-goals to get past each person in front of me (of course ignoring the speedy beans zipping past me on their zipps).

Coxy and I came across one another at the start of the final lap, making it all the more exciting… we took turns to pass one another (mainly him being in front of me to be honest!) and multiple times as he sped off into the distance I thought “right that’s it, he’s off, let him go”, but then I’d hear the 2Ms’ mantra in my head “Catch. Coxy. Catch. Coxy” and I’d put a little more power into my pedals. I came back across him about 10km from the end and we had another fun back and forth before he powered off into the distance. Then with a few hundred metres to go he came into my sights and I put in a cheeky little sprint once we turned the final corner, requiring an emergency stop on the dismount line (to be honest I almost forgot I’d have to stop!) and just managing to sneak in front of him on the run into transition. This meant that when Mike ripped the timing chip off my leg and set off on the run he was neck-and-neck with Loren….making for very exciting spectating!

It was great to have my part done, and for most of the cycle I was just thinking “I could NOT run 20k after this”. So obviously a fair bit of training to be done if I even want to consider entering a 70.3 race. I then had the fun part left of cheering on the runners. It turned out that the male teams had also gone into the run neck-and-neck so we had to wait for the guys to get about 10km into the race (so ooo about 5 minutes the speed they were running!) in order to see who was leading. It was so exciting waiting for Mike and Loren to come along and not knowing who would be leading. In the end Mike just pipped Loren to the post, with what has to be one of the most energetic crossings of the finish line I’ve ever witnessed.

The rest of the afternoon and evening was filled with a massage (ouch!), and then plenty of food and celebratory drinks. I loved it all. It’s mad to think that it was only just over a month ago that I nervously went along to my first Friday morning ocean swim with Loren, having never met any of the club, to go to having such a fun weekend away and feeling comfortable enough to share a room with 5 guys, even to walk in on one of them in the bathroom 😉 and most of all to expose anyone to my singing!

As before a round-up of other highlights in the last couple of weeks: 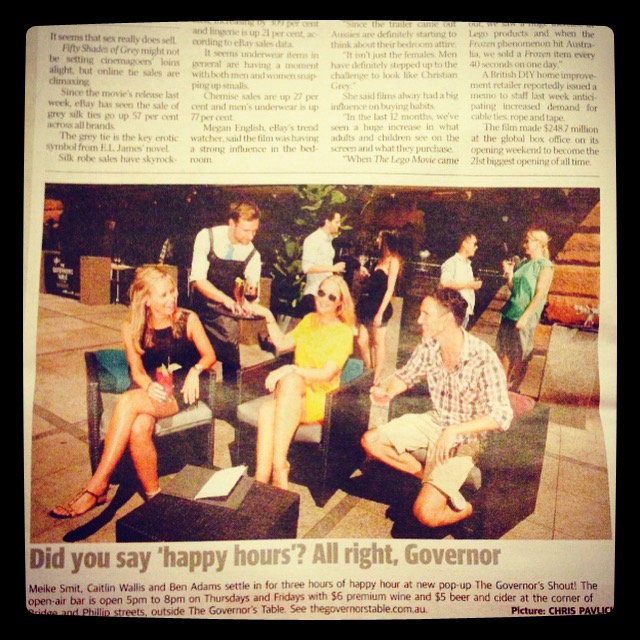 Off to Hunter Valley this weekend for a wine tour so will report back! xx