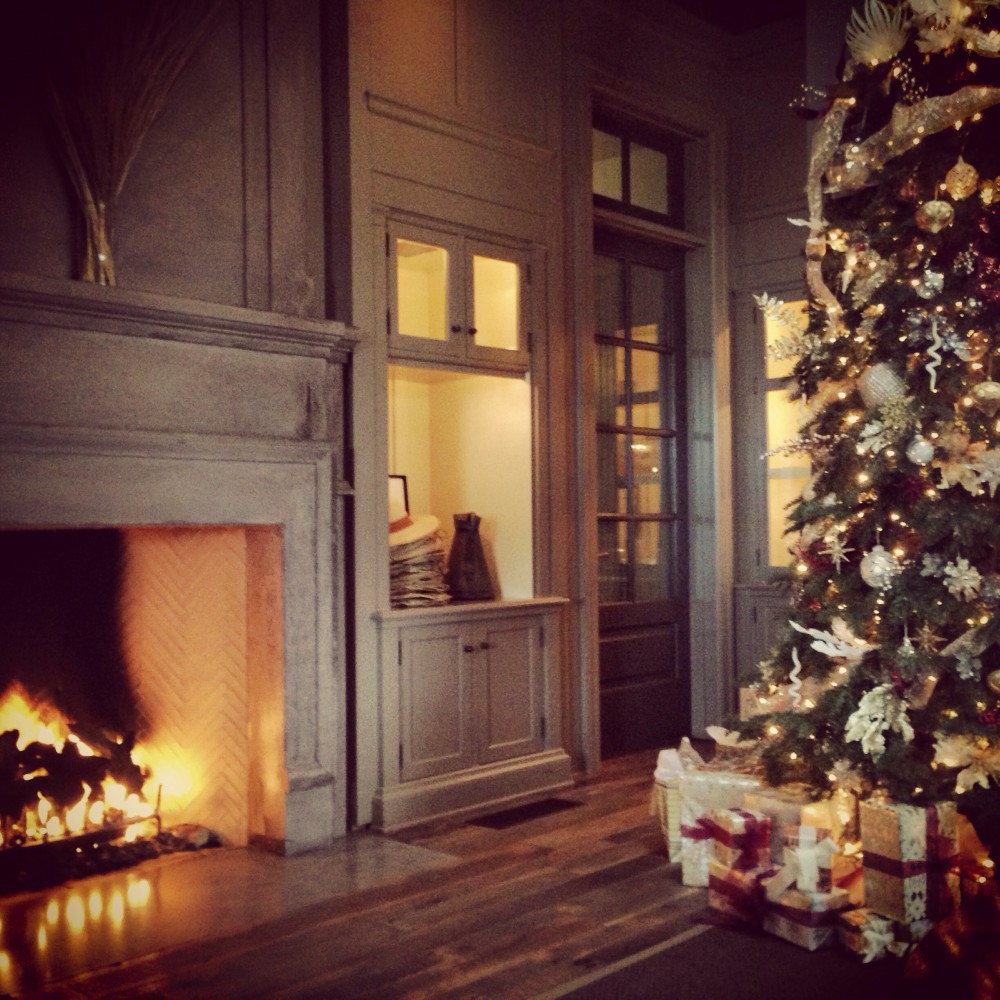 Our day in Napa Valley was one of my favourite of the trip so far.

We dropped off the car where we were staying and met Bill, our driver for the day. He had local knowledge and a car stocked full of water…both essentials for a day of wine tasting.

Our first visit was to Frog’s Leap, which turned out to be my favourite of the day.

As soon as we walked in we were greeted by a roaring fire and huge Christmas tree, and it felt like a family living room.

For some reason, even though it was a week before Christmas, I’d had visions of us wine tasting outside in the sunshine. I just couldn’t picture wintery wine tasting. We did end up outside but it was totally different to how I’d imagined, so cosy and festive!

We were the only group tasting there and were led out onto a beautiful terrace looking over the valley where there was a table waiting, laden with wine glasses and a little plate of cheese and biscuits.

In Napa you generally book into, and pay for, wine tastings. I far preferred this method to wine tastings I’ve experienced in France where the owners will give you samples for free, but this creates an obligation to buy, which can be awkward if you’re not particularly keen on any!

I thought that the tasting at Frog’s Leap was exceptionally good value, $20 for 6 wines, with the option to have more of any we enjoyed. We were given soft blankets to snuggle up under and it felt like the sort of place you would just go for a drink with friends if you could.

My favourite wine that we tried there was their 2012 Heritage Blend that they only made 12 cases of therefore only sell at the vineyards and not onto the market. I couldn’t resist buying a bottle for Christmas dinner the following week.

After Frog’s Leap we drove to Foley Johnson, which was a totally different experience. The wine tasting was carried out at a stand-up bar, therefore less sociable. We did however learn more about the production process as we were shown around the tanks. I didn’t enjoy the wines there as much as at Frog’s Leap and the tasting was $30 for what I felt was not as good an experience.

After Foley Johnson we decided it would be wise to grab some lunch before heading to our next tour at Jarvis. Bill suggested a little deli that he knew where Saj and Bansi got bread and cheese in the spirit of the wine tasting. I got a giant crab-cake and avocado sandwich, and much to James’ horror (and I think slight admiration) a whole head of roasted garlic 😻

Those who know me well will know that garlic is one of my main food loves (along with broccoli, lemon, corriander….) so I couldn’t pass up the opportunity. I think Bill was also slightly shocked that I was just chowing down on it in the passenger seat of his car, and offered me a mint as we got out at Jarvis, which he said was for James’ sake.

Jarvis was completely unique, ridiculous and fantastic. Built by an telecoms millionaire who decided he wanted to establish a vineyard, and that money was no object in doing so.

It was like a bond villain’s layer of seemingly endless caves built into the hills at the edge of Napa Valley. It turned out we were actually slightly late for the tour so caught up with the guide and other couple as they were partway around (luckily we hadn’t missed any tasting!)

They had a huge central cavern, with apparently the largest unsupported dome roof in the world, I think (we were a few glasses into the day at this point!) which is used once a year for a huge ball for the Jarvis “inner circle” wine club members. The entrance hall to the cavern contained huge lumps of different coloured quartz.

Basically the whole place was completely excessive, oh there was also a waterfall inside the tunnels! I think I found it especially ridiculous in contrast to the natural caves and waterfalls in Semuk Champey I’d been in one week before. The Jarvis caves made no qualms with how superficial they were, the inside walls had a small attempt at “rock like texture” but this was cancelled out by the Art Deco bathrooms, and the grand table with table cloth in a room with glass doors where we did our wine tasting.

I may sound like I was unimpressed by it, which is definitely not the case!! It was an amazing place to see, just perhaps not how I’d design it with an unlimited budget! The wine was delicious though, lots of powerful and spicy reds, though also the most expensive bottles of the day (well they had to pay for that waterfall somehow!)

Bill was waiting as we emerged blinking into to sunlight. It was about 3pm by now and we were weighing up if we’d had our fill for the day after about 15 tasters. We decided that we were slightly red-ed out so Bill suggested Clos du Val to try some whites.

Clos Du Val was another stand-up bar tasting, although it had little gazebos outside that looked like they’d be lovely in the summer. You could taste a trio of wines for $15 which was ideal as I’m not sure I could have handled another 5 or 6. My favourite was their 2013 ‘Three Graces White’ so also got a bottle of that for Christmas celebrations.

Despite terrifying me at times, having a car has been great as it’s meant it can temporarily expand my belongings. When in Central America I couldn’t have considered buying two bottles of wine as I’d probably have slipped a disc in my back with the added weight to my backpack.

After Clos Du Val we were officially all tuckered out, and Bill dropped us back to our hotel: the Millican Creek Inn. We hadn’t had a chance to look around when we arrived in the morning…I think it was the nicest room I’ve ever stayed in 😊 It had a freestanding jacuzzi bath in one corner, a giant bed with a fireplace at the foot, a balcony with views out over the creek, and his and hers bathrobes. Everyone loves a robe!!!

At reception they told us that although the reception closed at 8pm, we had keys so we could come back later in for port and cookies if we got peckish.
What. A. Dream (although I wasn’t quite ready for port just then!)

Saj and Bansi were staying closer to Napa town centre so we arranged to meet at an Italian restaurant called Oenotri. James and I were a little early so grabbed a drink at the bar…the reservation system over here seems quite odd, because tables often aren’t ready when you arrive at your reservation time or a few minutes before, as they obviously book sittings in too close together. However, they will only hold tables 15 minutes max if you’re late so they sort of win both ways, and you only have a very brief optimal arrival window.

Oenotri had a really good ambience, and we braved a bottle of prosecco after the day of reds, it went down fine. The food was a little disappointing though, and the service strange.

The waiter was the most enthusiastic to date (a tough title to gain) but seemed to have a little spiel memorised. He basically talked us through blow-by-blow how he was going to serve us our food. I.e “so guys, I’ve taken your drink orders and now I’ve come to take your food orders, and then I will bring you the food and sharer plates”

I ordered a ravioli, which was the worst I’ve ever had, the parcels were virtually empty of filling, and were swilling around in a watery oily pool. I am not usually a complainer but it was virtually inedible so I said something to Mr Happy Clappy server and he said “ah sorry, it’s not for everyone”, which I found very odd as it implied I was being picky, whereas I don’t think that dish would be for anyone! Anyhow, he swapped it for a chorizo pizza which was far better.

We got an Uber back to the hotel which looked like the ‘pope-mobile’ with a Philippino driver who loved to chat and was delighted that his wife let him keep his Uber earnings.

Had an absolutely delightful nights sleep at Millican Creek and breakfast was served to the rooms in the morning. I had hoped we could eat out on the balcony but it was absolutely tipping it down when we woke up so that was written off. I suppose breakfast in bed is an acceptable alternative.

After breakfast we packed up and set off for the next leg of the trip to Yosemite national park!! 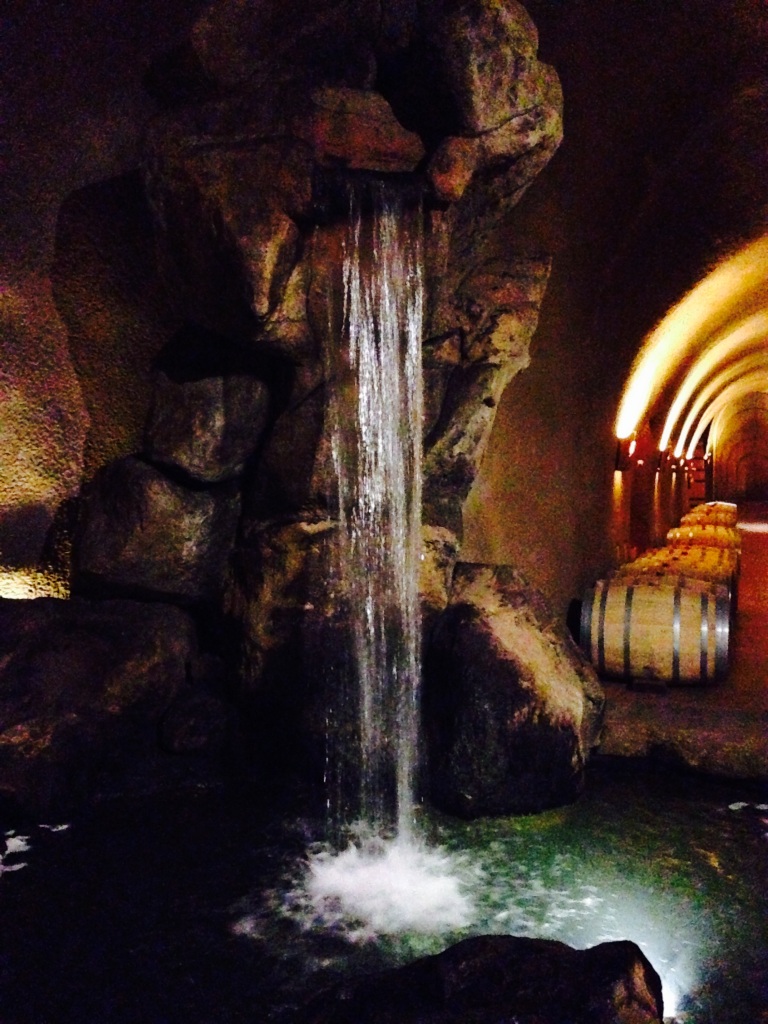