I’ll be honest, Lebanon probably wasn’t top of my list of countries I was planning visit next, so I’m really glad that two of our good friends, Sinead and Wissam, decided to hold their wedding there in mid-2019. This was then the catalyst for a longer Middle East trip for Ben and I, including a couple of days in Dubai, and a roadtrip around Jordan.

To give a very brief wrap up of Sinead and Wissam’s romance…they first met at a rugby match outing that Ben had organised in Sydney, and they then got engaged in South Africa in 2018 on a triathlon trip that we were all on. We are very invested in their romance and its geographical adventures, so it felt only right to be there with them.

They also proved to be wonderful travel companions / tour guides in the few days leading up to their wedding. Many couples would be high stress at this point, but they totally took it in their stride, and Wiss was happy to spend a couple of days driving around the mad roads and showing us the beautiful countryside of Lebanon.

So Lebanon, I didn’t really know what to expect before arriving. It turned out to be a super cosmopolitan country, with huge geographical variety and a more liberal feel than both Jordan and Dubai.

The majority of the major urban centres, including the capital Beirut, are along the West coast, both for port access and practicality of construction. From the sparkling waters of the Med there’s around a 1 mile stretch of relatively flat land before the ground rises sharply upwards into hilly terrain.

This makes for stretched out cities, and driving up the West coast road, it was hard to tell where Beirut proper ended and where Jounieh (where we stayed) began.

After a busy couple of weeks in London, Dubai and Jordan, it was really lovely to be staying in one hotel for 6 nights. I even snuck in a couple of days of pure relaxation and reading by the pool, doing the classic: “read until too hot – dip in pool – repeat” pattern.

Saying that, it was also near the start of my training program for my first ever marathon. I was conscious I couldn’t fall off the wagon from the start and therefore we spent some sweaty sessions both at the community stadium/track that you can just see in the photo of Jounieh from above, and on the treadmill. Despite the A/C in the hotel gym being on full blast, Lebanon in June probably wasn’t the place for a distance running debut.

There was an element of Russian Roulette to the treadmill runs… power cuts are a common occurrence in Lebanon, these have in fact worsened in recent months and were one of the causes of protests earlier this year. We were lucky that the hotel had back-up generators, however there were a couple of heart stopping moments where the treadmill stopped dead in its tracks. No gradual slow down here. BOOM. The only thing that saved me from a full face plant was my remarkably slow pace!

Jounieh is no geographical exception and our hotel was located near the Telefrique (or cable car) which operates all day shuttling passengers up and down to Harissa – perched on the hill above Jounieh where two churches and the impressive ‘Our Lady of Lebanon’ statue are situated.

The cable car ran above the hotel, so we could see it moving all day, or not moving as the case may be when the power cuts happened. I didn’t really fancy the thought of dangling motionless in a little pod hundreds of metres above the highway, however luckily we got a clear run and made it to the top without drama. It felt almost voyeuristic passing about 10m from people’s balconies and windows!

We had a great day driving up the west coast, stopping off at the gorgeous coastal port and market town of Byblos (Jbiel). It is considered one of the oldest cities in the world with over 7000 years of continual inhabitance.

Byblos was beautiful, and had a great relaxed air to it. I’d definitely recommend setting aside a couple of hours to wander around the ruins of the castle and neighbouring temples. Then stroll through the souks and get a coffee or some lunch in the shade of the high city walls.

A short 10 minute drive further up the coast road and we got to ‘Pierre and Friends’ beach club where we saw out the rest of the afternoon. After spending a conservative Ramadan in Jordan and Dubai it was quite the contrast to be at a beach club with the tunes pumping, people drinking and smoking, and itsy-bitsy-teeny-weeny-polka-dot-bikinis 🙂

As a non-smoker, we’d been warned that smoking was rife in Lebanon, and that we should expect to be puffing by proxy at dinners, drinks, at the beach, etc. However, I was pleasantly surprised to not really notice it much throughout the trip. One tip though, is to make sure you specify to book a non-smoking room at your hotel, there are even whole non-smoking floors!

Finally we bar hopped a further 10 mins up the road to check out a venue for potential pre-wedding drinks later in the week – Colonel Brewery and Distillery in the town of Batroun.

One of my favourite things about destination weddings is having multiple occasions to get to know others attending. It can  make it so much more fun and you end up basically having a holiday with an extended group rather than just one day/evening. Maybe it’s just me but if there’s 100 people that I don’t know, I’m not likely to start trying to shout small talk over the DJ, whereas this trip was a really lovely way to get to know other guests better.

And get to know each other better we certainly did at Colonel later in the week… Wissam somehow managed to wrangle us a 5 hour unlimited drinks package down at the beach bar for US$30pp. Dangerous.

There were a few sore heads the day after, no better time to retreat to a cool, dark place, where no camera are allowed… Jeita Grotto!

The grotto was only about 10 minutes out of Jounieh and was one of the most specular and unusual places I’ve ever been! You may never have heard of it, and it probably doesn’t get the recognition it deserves as there was a super strict no-photo policy, with us having to hand over our phones before going in and having them locked away until we exited. There were also guards patrolling at regular intervals once we were inside. We are still unclear whether this was to somehow protect the grotto (not sure how, it’s pretty solid limestone…) or because they were worried that clueless tourists would drop phones into the caverns and demand a search-and-rescue. Make sure you check out some pictures of it because words don’t really do it justice!

It consisted of an ‘upper grotto’ and a ‘lower grotto’. I’d recommend catching the cable car from the entrance up to the upper grotto, exploring that, then walking down the hill to the lower grotto, where you’ll be whisked off on an electric boat on an underground river through the magical caverns. The boat being electric meant it glided silently and smoothly through the water, with no diesel fumes, and was skilfully steered through gaps that seemed impassibly narrow. A really wonderful experience!

One day we ventured away from the coast, and made the trip inland to the forest of the ‘Cedars of God’, via Baatara waterfall. The cedar tree is the national emblem of Lebanon and features on its flag (and cable cars, and many other things!)

There are not many cedars left now, due to the wood being used for artefacts and furniture, and it did feel a little bizarre that just outside the cedar forest was a street of stalls selling everything you can think of made of cedar…cedar chessboard anyone? Almost like going to an animal conservation park and then the stalls outside selling fur coats. I understand that people need to generate an income, but it was a shame given the trees were pretty sparse!

Due to the geography of Lebanon, there’s a saying that you can swim in the Med and ski all in the same day. June wasn’t quite ski-season, however as the road wound higher we could still see snow on the mountains.

It was so lovely to get away from the bustle of the coast and see a bit more of Lebanese life up in the mountain villages. The scenery was absolutely stunning with valleys of orchards appearing around each bend. It reminded me of parts of the Alps, pretty little villages nestled amongst the hills.

We stopped off at Baatara waterfall. The waterfall is just a short walk from the road, and though it was mid-summer so it didn’t have a huge volume of water, it was beautiful as it came through a hole in the rock and fell past multi-level rock bridges 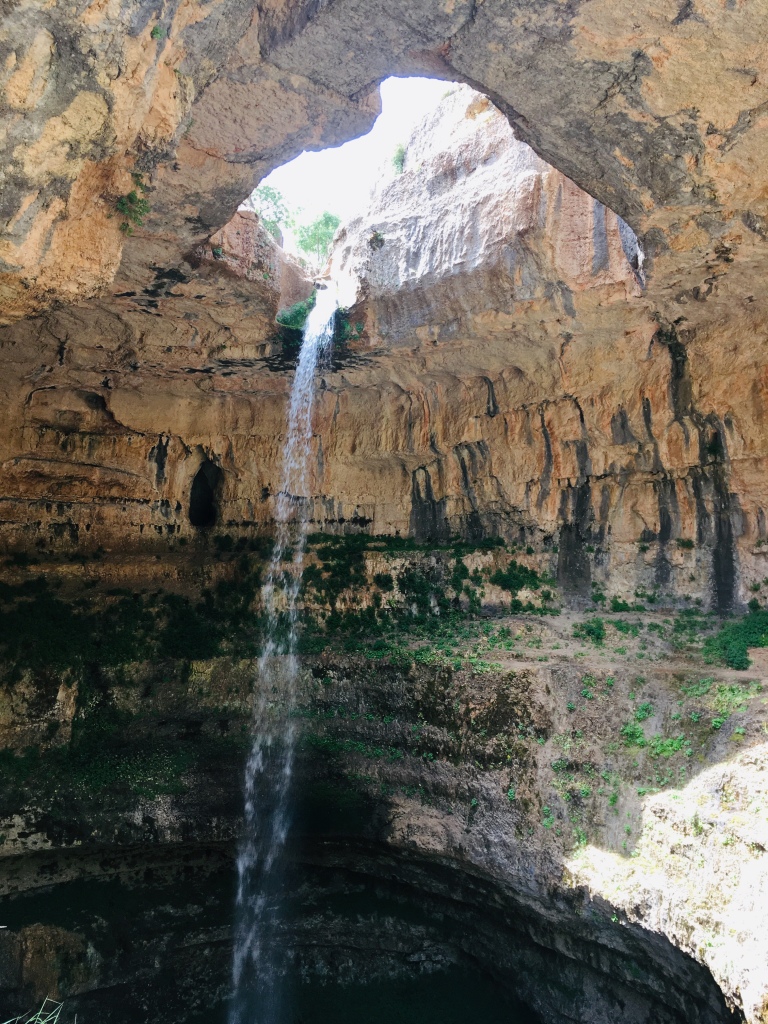 The one place we didn’t make it to that I was hoping to visit was Baalbek, which has UNESCO world heritage Roman temple ruins. It’s a bit further inland in the Beqaa Valley closer to the Syrian border. In summer 2019 travel advice was not to travel through Beqaa valley unless essential, so we decided to give Baalbek a miss.

We wrapped up the week with the main event, the wedding! Kudos to Sinead for agreeing to get married in a country she’d never even visited before, and they managed to pull off a totally superb event. The venue high in the hills was like something out of a film…

It was a beautiful day, and there were some brilliant ‘extra’ features, like the sword to cut the multi-tier cake (who doesn’t need that), the smoke machine (ditto), and the tambourines and drums that kept everyone dancing all night. 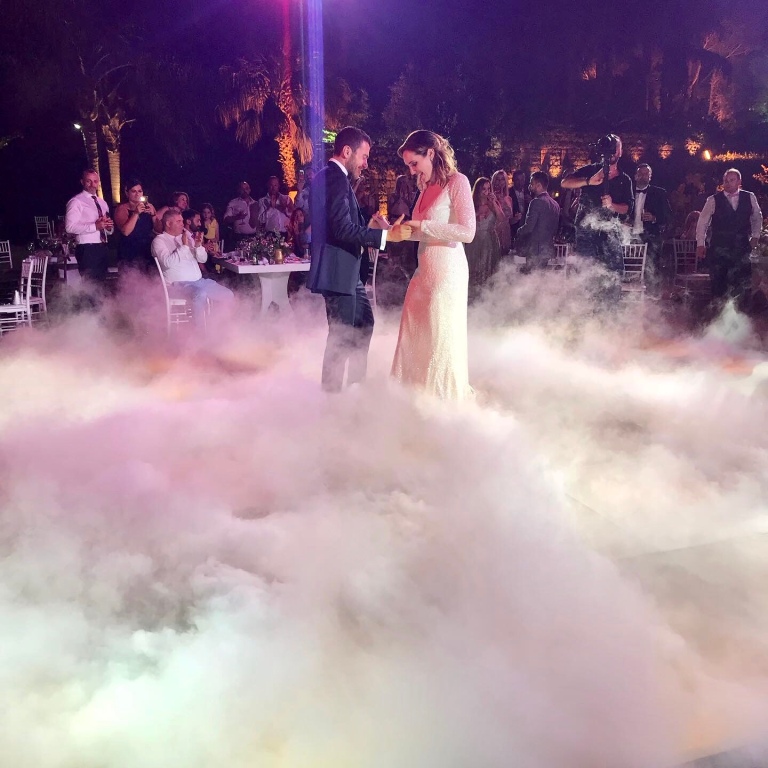 Sadly, the situation in Lebanon has become less stable since last summer, with more civilian protests and unrest. Lebanon has a tumultuous history, having faced civil war, religious conflicts, unrest between neighbouring countries and a stretched economic system (as evidenced by the power cuts!) I really enjoyed our time in Lebanon, and hope to be able to return and explore more one day.

Oh and one final tip… change your currency before you leave the country! We left with a not insignificant amount of Lebanese Dollars, thinking we’d just exchange them en route home. FX desk at Qatar airport said no, about 5 agents in Sydney said no (despite Sydney having a large Lebanese population!) and it was a pure stroke of luck that a colleague had family travelling to Lebanon that I managed to on-sell them!

6 thoughts on “Where’s Wallis? Loved up in Lebanon”