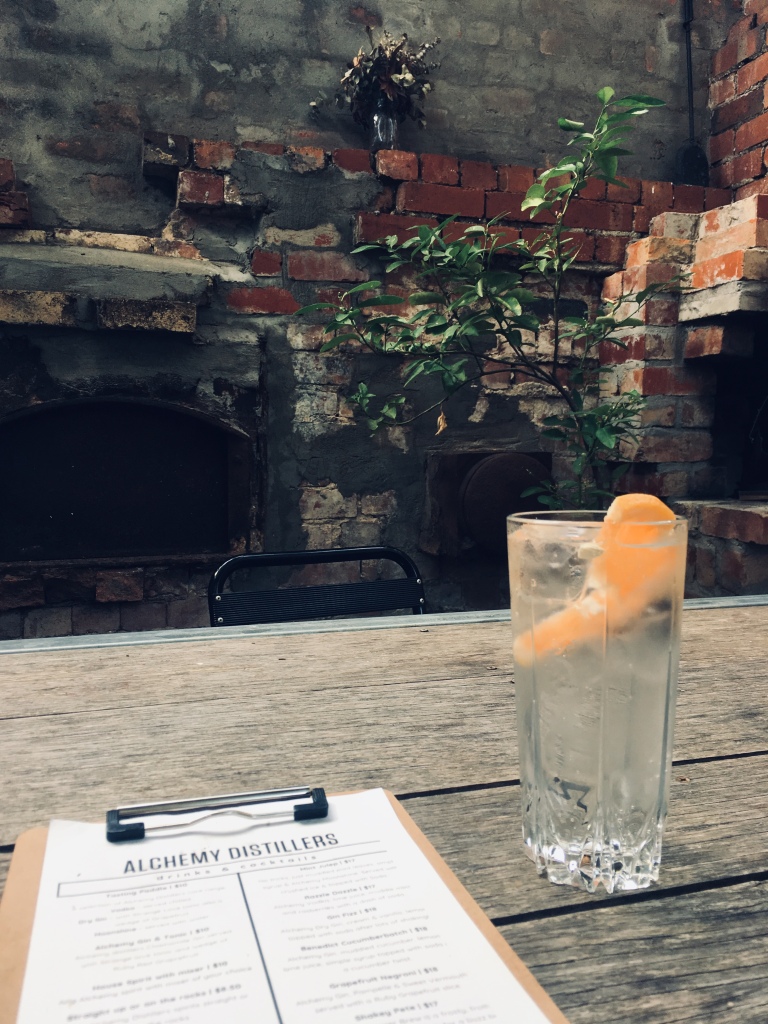 DAY 5: Healesville —> Dandenong Ranges NP —> Melbourne CBD —> Daylesford
We couldn’t leave the Yarra Valley without doing some wine tasting. The region is famous for its Chardonnay and Pinot Noir. We stopped in at ‘Soumah’ and ‘Pimpernel’ for tastings, where they do my favoured practice of taking a nominal fee ($5) for a tasting of 6-8 wines and then you get this off the price of a bottle if you buy.
Saj, Bans and I are quite the wine tasting team, having done so together in California’s Napa Valley in winter 2014 too. Suggestion to anyone with an interest in wine who hasn’t watched Netflix’s documentary ‘Sour Grapes’ to do so, it is a fascinating story!
We then got a cheese platter at Coldstream Dairy before heading to the Dandenong Ranges National Park to meet up with Ben’s brother Zach and his girlfriend Jess to walk the 1000 steps Kokoda track memorial walk. It was a fantastic walk, although very busy, including some keen people running the steps, kicking off the New Year health-drive early!!
From there, we drove into Melbourne CBD and had a delicious meal at ‘Shanghai Street’ in Chinatown. Then we dropped Saj and Bans at the airport, luckily no drone incidents this time, where they were flying back to Sydney in time for a NYE firework cruise.
There was an amusing moment when we were trip planning when Saj asked why we didn’t just fly back with them, I said “well, we need to get the car back to Sydney” to which she said “Why don’t you just leave the car in Melbourne?!”. She hadn’t realised we were taking our own car not a rental, so leaving it in Melbourne wasn’t really an option!
Finally, Ben and I drove the other way out of Melbourne to the West to the small town of Daylesford, where his good friend Perko lives. We were staying in the town pub/hotel so it was pretty easy to ‘get home’ after a few drinks catching up with Perko at the bar.
​
DAY 6: Daylesford, Hepburn Springs and surrounds….
Day 6 was the first and last time on the trip that we spent 2 nights in the same place. After the gold-gate of missing Walhalla, Ben was super keen to head over to Sovereign Hill open air museum. Perko was happy to accompany him which suited me perfectly as I wanted to pay a visit to the Hepburn Springs Bathhouse and Spa.
Daylesford and Hepburn Springs and surrounds are known for their mineral water, which due to the natural build up of elements in the ground comes out naturally carbonated in some areas. It is a slightly acquired taste – nicer when cold and fresh out the ground, more metallic tasting as it warms up.
I had a wonderful morning at the spa and exploring the natural springs, followed by a visit to a lavender farm. The lavender wasn’t quite as impressive as the fields I visited last year near Wanaka, NZ, but the gardens were beautiful, and found another suspension bridge here!
Ben and Perko met me for lunch, filled with tales from their wonderful morning at Sovereign Hill. We spent the rest of the day doing a happy mix of country pubs and walks.
DAY 7: Daylesford —> Hanging Rock —> Beechworth —> Wagga Wagga
Day 7 and it was time to start the in land drive back towards Sydney. Perko recommended we stop at Hanging Rock en route and I’m very glad we did as it was one of the highlights of the trip. It is a volcanic rock formation, meaning we were like big kids at the top, playing and climbing around.
The novel ‘Picnic at Hanging Rock’ is a mystery surrounding the disappearance of schoolgirls and their teacher at the rock, however at 9am with the sun shining bright it wasn’t too eery!

Our next stop was Beechworth where there is a famous bakery but it was too busy to merit queuing. A storm arrived just as we got to town so we hopped in the car to continue on to our NYE destination – Wagga Wagga. Whilst on the journey we got a call from the hotel manager in Daylesford who implied that we had stolen two pillows from the room. Not sure on their usual clientele. We’d both said how good the stay was in Daylesford so a bit of a shame for it to end on a (pil)low note.

As someone who struggles to stay up past 10pm on a good night, I’m not normally a NYE fan, but we were hosted in Wagga by our friend Burdy from our cycling group in Sydney and another cycling pal Maarten was also in town. We had a delicious dinner and cocktails at The Birdhouse restaurant followed by bubbles and some sparklers in the park at midnight. Wagga exceeded my expectations with a very chilled and friendly vibe! Would like to return for the ‘Gears and Beers’ cycling event.

DAY 8: Wagga Wagga —> Sydney
HOMETIME! Nearly 5 hours of highway, not much to report here. We didn’t stop but there are lots of good spots around Gundagai that we visited last year for my birthday weekend.
Overall a brilliant trip and great to see some more of Australia!
Cxxx