We travelled down to the ‘Snowy Mountains’ region of New South Wales state, near the Victorian border.

Where we stayed: Razorback apartments, $110/night

Jindabyne, and the nearby villages of Thredbo and Perisher (both in the Kosciuszko National Park) are prime Australian ski resorts in the winter months. I’m not sure that ‘prime Australian skiing’ is saying too much though, as I’ve heard that the skiing doesn’t really measure up in either price or quality when compared to Europe, Canada, Japan, even NZ….

However, the area still seems to be somewhat underrated for a summer holiday destination…probably due to the plethora of beaches readily available in Australia to spend Christmas on! It definitely reminded me of parts of Central Otago in New Zealand (Wanaka, Queenstown, Naseby) that I spent last Christmas in, however it doesn’t yet have the flood of summer tourism that they do.

It does see quite the influx of triathletes in late December and January as many Sydney clubs head there for annual training camps. The roads were empty on Christmas eve and Christmas day and then suddenly the bikes began arriving. This continues through until the Australia Day weekend (end of January). In fact, if anyone’s looking for a cycling focussed retreat that weekend my lovely friend is running one, details here

For the benefit of those who have no interest in road cycling in Jindabyne, and never intend to do it, then the first part of this post contains the ‘non-triathlon’ activities.

What to do in Jindabyne/The Snowy Mountains:

This is located 40km from Jindabyne on the Rocky Plain Road. Entry was $6.50pp, then we paid $15 for a rod to share, and we were allowed to catch 2 fish. Whatever you caught you had to keep, and the fish cost $29/kg.

We parked up next to a field with a horse in it. He wandered over so I went to pat his muzzle. He was friendly, but quite feisty/licky so I decided to stop stroking him, just as Ben noticed the sign that said “Hello. My name is Rusty. Please do NOT pet me as I will bite”…. oops!

After processing a large tour group, the lady at the desk welcomed us, explained how it all worked, and asked if we were in a hurry. I said no, not particularly, so she suggested that rather than going to the ‘ponds’ (where there is a higher density of fish so easier to catch) that we venture up to the more picturesque lake, where there were some alpaca roaming around.

I lasted about 30 minutes there before giving up and going back to the ponds.

It still took about 15 minutes to catch anything in a pond about 3 x 3m. I blame the tour group.

I told the lady about our lake failure when we took our fish inside, and she said “Oh no, by more time I meant at least a couple of hours” !! I don’t think fishing will be my new sport. I do not have the patience for it!

The kitchen prepped our trout with lemon and butter and we took it out to BBQ before eating with some salad and chips.

We also got an alpaca burger. I asked if the alpaca was farmed from the ones by the lake. She looked somewhat horrified and told me they were her pets.

I’d previously cycled past the distillery turning and gazed longingly at the signs whilst sipping some horrid electrolyte drink (well, not a G&T anyway!)

Wild Brumby is about 10km from Jindabyne along the road to Thredbo. We went for lunch on New Years day and made a booking, which turned out to be wise as it seemed that more people were there than in town. 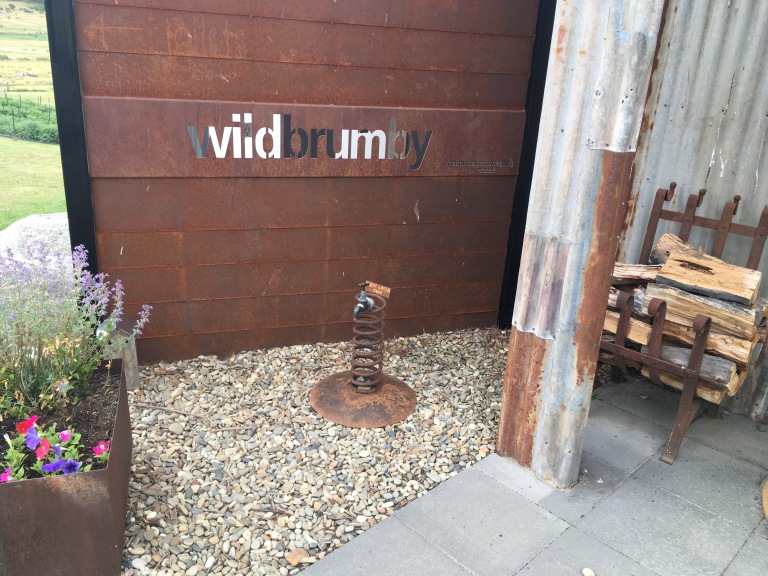 It had a great outdoor area, and loads of kids playing on a sculpture of a horse (I presume a namesake ‘Brumby’ – an Australian wild horse). The building was very modern and the distilling apparatus was right in the middle of the restaurant, although turned off during the day due to heat.

I ordered a Wild Brumby G&T which went down well, and whilst we waited for food we could sample the homemade schnapps in various flavours (cherry, apple, limoncello..) and also the raspberry infused gin – delicious!

Personally, I wasn’t super keen on the food menu. It was very ‘bavarian’ themed…lots of schnitzels and sauerkraut…maybe good in winter but a little heavy for summer, but Ben was happy with his veal schnitzel burger.

What did delight me was the ‘Bambino’ ice-cream cones. They came in all sorts of flavours and my mango one that I ate whilst wandering the gardens was so yummy that I snuck back in to get a mint choc chip one for the drive home. Don’t judge. They were only Bambino.

A bottle of the trademark Wild Brumby gin made it back to Sydney and is begging for us to host something.

Other great food spots that we visited during the trip were the Crackenback Farm Restaurant and Birchwood Cafe, right below our apartment.

We didn’t make it there this trip (I felt I’d had enough equine interaction after meeting Rusty!) but Pender Lea Stables does 1 and 2 hour riding excursions. Apparently their holiday chalets are also pretty swish!

Admittedly, we did visit the dam as part of one of the cycles, but I’d recommend driving out there for a picnic or something. It was huge, and the scenery was amazing. The dead trees and colours reminded me more of an African landscape than anything I’ve seen before in Australia!

Okay OKAY this is technically cycling. But not the sort I’m used to. We hired mountain bikes from ‘Sacred Ride’ bike shop in the town centre. It was $25/hr or $35/half day for decent Giant MTBs. Sacred ride do a ‘Full Moon’ ride up to the top of Mt Kosciuszko, which sounded fantastic, but no full moon when we were there!

There are a variety of trails you can take from town, we went East across the dam. It was DAM hard work 😛

15km on a mountain bike felt like 4 hours on a road bike. The focus required was exhausting. I really enjoyed it though, and for someone as bad at descending hills as I am on the road bike, I actually felt much more confident descending on the mountain bike.

The day after we left the trail extension from Crackenback down to Jindabyne was opened. There is now a trail the whole way (35km or so) from Thredbo down to Jindabyne. I believe that various companies offer shuttle services.

From Thredbo you can also put mountain bikes on the chairlifts and take them up higher to access more downhill trails. We found out that lift passes are $80/day (!!) even for summer season…doesn’t bode well for winter does it!

There are apparently plans in place to create trails the whole way around Lake Jindabyne.

Okay now for the road cycling…we did all the ‘standard’ rides around Jindabyne in an attempt to complete the Rapha ‘Festive 500’ challenge (500km ridden between Christmas and NY). It turns out that the Festive 500 actually starts on the 24th, which we didn’t know, so we were going in at a little disadvantage after a travelling day on 24th.

We had one rainy day where we only had a couple of hours window to ride, so we snuck over to the Velodrome at the Institute of Sport where we stayed for camp last year. Probably the only flat riding that there is in Jindabyne.

We decided to head back out to Rocky Plain Road and explore a bit further, aiming to tick off the 140ks in the one day. We drove to the carpark at the start of Eucumbene Road, about 15km from Jindabyne. We rode 15km to the Eucumbene Dam turning, hen took this turn and rode another 15km or so uphill to the dam. Then on to the end of the road at Braemar Bay where we turned around and headed back to the junction. We were planning to keep going on Rocky Plain Road but Ben had a puncture so we then only had one set of spares between us, and would only be getting further from the car. We returned to the car and by then had about 70km on the watches. Half way.

What to do next? I couldn’t handle the thought of riding out on the deceptive false flat Eucumbene Road for a 3rd time that week, so we drove across to Berridale (accidentally recorded on my Strava and got a QOM…sorry ‘Pallas Athena’ for stealing your crown!) where we set off on the Middlingbank Road. This climbed solidly for 30km…and showed no signs of stopping. We planned to head out 35km then turn back, but the increasingly looming sky over the mountains caused us to turn at about 30ks. It was a very fast downhill run back into town, with the thunder chasing us, and we had JUST got back to the car when the heavens opened. 129km ridden. 1,500m elevation.

13km still to do on the 31st…hence the mountain bike fun!

I hope this gives you some ideas of what to do in Jindabyne. And if you’re going to train then the things that your family and friends could do whilst you’re there!